I've CASE'd a card posted recently by Liz (scroll down a bit to find her version) and she has also recently done something similar with another edger die.  Seeing her card reminded me that I'd purchased a papercut style edger die a fair time ago in the good old days when we could safely go to large craft fairs, but not until I dug mine out of retirement did I realise I had the self-same die she had used - good taste in dies obviously!!  I've also made my card as a Sympathy one but of course hope I won't need it - always handy to have a couple in reserve though.  Unusually for me I've actually cut into three whole new pieces of card for this one but of course doing so has left me with some very useful snippets for future use😉.  This type of card does really need to be quite simple and unadorned so thanks Liz for giving me the idea. 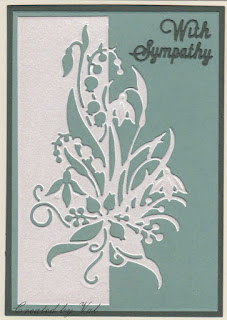 A DL Daisy card to share today.  This one took a while to make because it entailed die cutting in several different colours so that I could piece the details all together to form the design - just as well I enjoy that sort of crafting 😉😉 but then if I didn't, I suppose I probably wouldn't do it.  As luck would have it I had some daisy patterned paper in my stash which I could use to back the whole design.   It's certainly a day for staying inside today because it is bitterly cold outside despite some sunshine - think they call it wind chill - brrr!!  Taking it fairly easy anyway because I had my Covid Spring booster jab last night - oops! might be giving my age away here 🤣 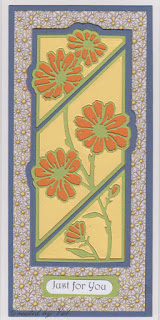 I have another Flower Fairy card to share today using up one of the images and some papers I printed from a CD recently.  This is not a recent CD but one I've had for some years and I was pleased to find that it still works OK with the latest Windows.  I chose some card which toned well with the image and papers and simply die cut various squares, layered them up and composed them into this 'Just for You' card - nothing complicated but it has used one more of the images and bits and pieces of card from my oddments box. 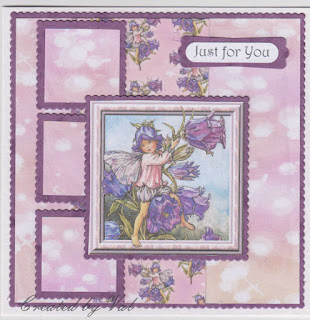