I've made a DL card for a change using kraft card and parchment along with a piece of patterned paper.  I've never really done much in the way of cutting out using a two needle tool and scissors so today I 'bit the bullet' and tried the technique hoping I wouldn't ruin the embossing and colouring I'd already completed.  I have to admit they are very small sections but it is a start!!  Fortunately I have a light box which I found made it much easier to see where the needles were going into the design than trying to do it under normal daylight conditions which is what I've tried previously with little success. 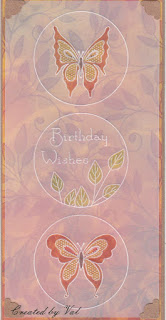 It is time to visit the Snippets Playground again even though it is a horrible grey and rainy morning so I guess it will be macs and brollies all round.  I've used up a few more of my snippets making another Christmas card starting with the last remaining snippet of a piece of watercolour paper which had been coloured with Pixie Powder and salt.  I then found a reasonably sized piece of white to emboss the igloo, followed by some smaller pieces of black, orange and white for the die cut penguins. Rather than cut tiny pieces in red I used a pen to colour the bow tie and tiny hat.  I'm not entirely sure whether penguins live where there would be igloos but I'm claiming artistic licence here!!  A final piece of black card was used to die cut the Santa and sleigh flying across the sky and because this is so obviously a Christmas card I've not added any words to the front although they will be on the insert.

As usual there is a great prize to be won by a lucky entrant and if you visit the Playground later there should be pictures of two cards for inspiration (one from a guest designer isn't showing up at the moment but should be there later).  I'm sure there will also be a link to Megan's blog so that you can visit  to see more of her work. 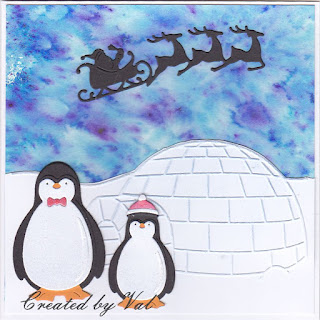 Santa - die from Joanna sheen
Penguins - dies from Tonic
Igloo - embossing folder given away free last year with a magazine
Posted by Aquarius at 10:49 8 comments: