I wonder if anyone else is having problems posting comments - sometimes they work quickly as usual and at other times they just will not send for some reason so apologies if I appear to be ignoring some of you.
Posted by Aquarius at 16:31 No comments:

Many of my Christmas cards this year have been made using various freebies (stamps and or dies) either from this year or previous years and which have been used often in combination with each other or with purchased items.  This is one such card made using a set of dies and stamps designed by Phill Martin which is from this year's selection along with some bows from a set from last year and an embossing folder which I purchased.

The baubles were stamped onto some red card using Versamark ink pad and embossed with fine detail white powder.  The sentiment was done in the same way and then the dies were used to cut out the two baubles and the red oval.  The baubles were then popped onto a background of pearl card embossed to give a nice texture.  Finally two gold bows were die cut and some red gems used to 'suspend' the baubles. 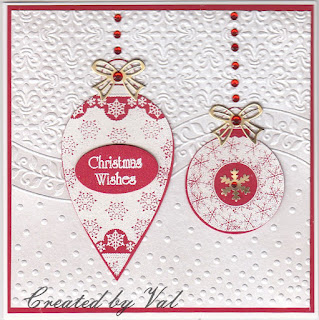 Baubles - freebie die and stamp set by Phill Martin given with magazine this year
Bows - die from s set given away last year with a magazine
Embossing Folder - from Craft Stash
Posted by Aquarius at 14:39 2 comments:

I made a start on tidying away my seasonal bits and pieces but as usual got sidetracked into making 'just one more' - at least I already have a few cards in hand for next Christmas now which can't be bad.  I started by stamping a group of snowy trees onto some white card using green ink before placing the die onto a suitable part of the design to cut the top layer of the tree.  I then cut the bottom layer using card in the same colour as the ink used for stamping.  Some glue was applied to the snowy parts of the image and covered with Glamour Dust but this doesn't show up well here.  I then found some background card, baker's twine and a scrap of plaid paper to finish off the card. Some tiny foam pads were placed behind the 'lift up' parts of the top tree and a silver star placed on the top.

It is a thoroughly miserable and very wet day here today so spending time in the craft room seemed the way to go.  Now it is back to the tidying and trying not to become sidetracked yet again - no promises though. 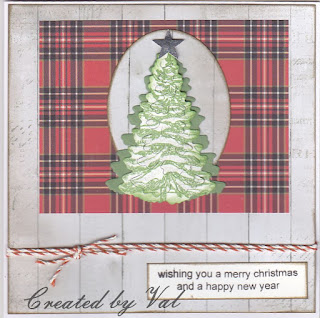 This was a fairly quick card to make once I'd coloured the piece of white card using Distress Oxide inks in two shades of green.  I found a suitable piece of background paper and a stray die cut star along with a piece of toning ribbon and put it all together.  The trees were stamped onto the inky layer and a rectangular die used to cut out and as luck would have it I'd come across some Stickles which I've had for YEARS and which I was afraid would have dried out but they are fine and free flowing so I added some to each of the baubles on the trees.  Hopefully I've now made enough Christmas cards and I can put things away, have a tidy up and then make a selection of everyday cards for a change. 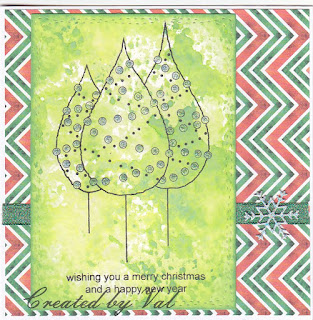