Yet another floral card to share today, made yesterday to cheer me up on a very grey, very wet Wednesday.  Bit of a contrast today because we have blue skies and sunshine although still winter temperatures of course. For this one I've pulled out a long-retired stamp set which I've had for many years. These date back to well before stamp sets came with matching dies so anything we wanted cut out had to be fussy cut with scissors which is what I've done here - at least everything except the sentiment oval which was die cut. For the outer blue square I was unable to find a piece of card to tone nicely with the blue I'd used for the stamping so I simply inked around the edges using the same ink - perfect match of course. The white square had the darker blue swirls stamped before being put through an embossing folder for some texture.  The blue plaque and flowers were fussy cut and the sentiment was stamped and die cut into an oval. 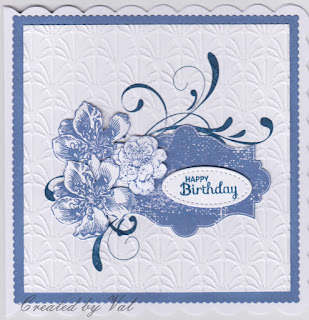 Another Christmas card to share today which hopefully has reached its destination although it was well into teatime yesterday before  my post arrived so the postal delivery people are obviously being kept pretty busy this year.  I remember a time when each year there was plenty of seasonal work for students who used to join the 'posties' in the run up so that the mail all got through in time and of course in those days there were also more deliveries each day rather than just the one we get now. There were even deliveries on the Sunday prior to Christmas day then - Guess I'm showing my age here 😉.

For this card I made up the background using two pieces of designer paper, the bottom one being die cut and laid over the 'sky' area.  The large word was die cut using white card and also a few miscellaneous snowflakes were cut to scatter around.  The little iridescent stars in the centre of the snowflakes look pink here but they look different depending which angle you view them on the actual card. The whole design was backed with a scalloped square of pretty silver card 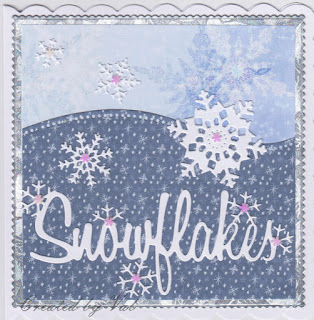 This time the team at Let's Squash It are asking for a combination of embossing and die cutting or fussy cutting - lots of possibilities here I'm sure. I decided to go down the die cutting route and started by cutting out a 'brass' jar to contain an assortment of die cut flowers.  This jar was then embossed using a floral embossing folder to give the appearance of a decorative brass pot.  The selection of die cut flowers were in a container on my desk left from a session of stamping, colouring and cutting - always handy to have a few flowers ready to pick up and use. This was all arranged onto some die cut shapes with the addition of a paper doily along with a label for the sentiment.  I'm sure many of us have lots of rarely used embossing folders in our stash and this challenge is a great excuse to bring some of them out into the limelight. 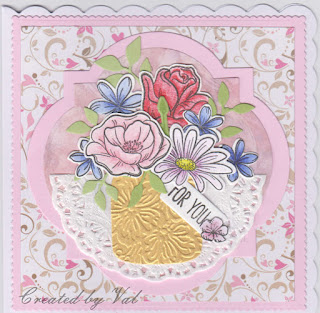