I tried a letterpress technique using an embossing folder and distress Oxide Ink - the piece was not embossed.  I rubbed the ink pad directly and partially onto one side of the folder and spritzed with water before carefully pressing a piece of white card onto the inky surface.  While it was still wet I sprinkled with salt and left to dry which has left some interesting texture and also slightly changed the colour of the ink in places.  Not wishing to cover up too much of the resulting pattern I've cut a panel using edge dies, stamped a sentiment and then simply overlaid a die cut flower. 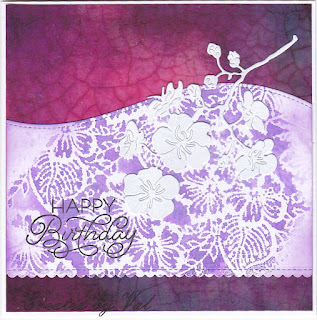 Background - paper from Artylicious which I seem to have had forever
Sentiment - from free set which came with a magazine
Flower - die from Tattered Lace
Edge dies - from Lawn Fawn (curve) and Die-namics(straight edge)
Posted by Aquarius at 09:40 5 comments:

Card for a Gent

I was awake at really silly o'clock today with no hope of dropping off again - trouble is that it feels like elevenses time already and makes for a long day.  I had an idea for this card while I was eating breakfast so my next move was into the craft room while it was still fresh in my head.  The background paper is from a pad which has been in my stash forever and the other elements are various die cuts and a bit of computer work for the 'birthday' word.  Once the pieces were cut it was just a case of assembling them into this 'card for a gent'.  Details of dies below as usual and now I think I'm off for my mid-morning coffee (early) and then maybe onto some boring domestic jobs. 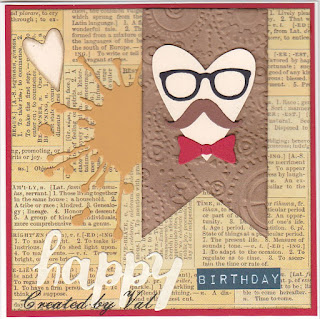 I've used up some more of my smaller pieces of scrap card for die-cutting three Santas ready to be made into cards.  This of course entailed cutting in red, white and black as well as, in this case, a silver layer for the backing pieces - a quiet sit down was needed to pop all the little detail pieces back into the shapes to build them up.  I know this sort of job would really irritate some people but I actually find it quite therapeutic, as long as I'm careful not to lose any of the bits, which can happen.

Anyway for this simple card I've used a piece of white pearl card and embossed using 'that' popular embossing folder which now has some companions (which I don't have) and a die set so that the curved strip can be cut to overlay nicely onto the background.  There is also - of course - a set of sentiment stamps which fit the curve beautifully.  These marketing people know what they are about don't they!!!  A piece of green card slightly larger than the embossed piece was the bottom layer and the sentiment was stamped in red onto the curved strip, sponged lightly with matching green.  The smallest of the Santas was popped onto the bottom and that's it - a CAS Christmas card, albeit there is more than one layer.  I used plain white card for the curved strip because I've found that stamping doesn't work too well direct onto the pearl surface as it often stays wet for a long time and smudges. 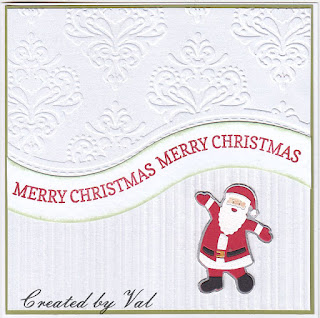 Today's acronym is CAS which could actually stand for the same as yesterday's card but in fact this time it is 'clean and simple'.  Quite often a CAS card is only one layer but this isn't necessarily so, provided it has plenty of white space and isn't overly decorated.  Using a Misti or something similar certainly helps with this style of card, particularly when it comes to placing a sentiment direct onto the card - something I always used to avoid because I found when I was actually trying hard to get it right something invariably went wrong by way of a smudged or badly stamped image and the card ended in the bin.

For this card I used a paint sample card, easily picked up from the DIY stores and in a good range of colours.  A few 'splodges' were stamped onto the background before popping on the paint sample and a die cut wild flower.  Finally a sentiment was stamped - that's it a CAS card and with no smudged fingerprints!!  I could maybe get used to this style but I do like to work in whatever takes my fancy from time to time - variety is the spice of life. 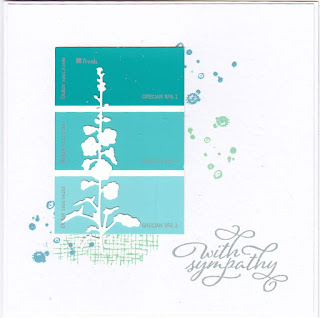 Background Stamping - Splodges Stampin' Up French Foliage, texture from SU Birds and Blooms
Due Cut Flower - Tim Holtz wildflower dies
Sentiment - from a set of free sentiment stamps given with magazine
Posted by Aquarius at 09:55 6 comments:

Don't you just love (or hate) acronyms!!  I'm familiar with the concept of CASE and have often done it but didn't really know what the letters actually stood for and thought I'd find out.  Apparently it stands for 'copy and share (or steal) everything' - I prefer the word share I must say.

I spotted one such CASEd card on Loll's blog and although I don't have the same dies to use I've made a card very much along the same lines using up a scrap of DOX background left over from another project.  I stamped an image onto this piece and trimmed it to size before popping over the base card which had a couple of die cuts added behind the image, a stamped sentiment and finally a die cut treble clef.  This is far from my usual style of card, mainly because I have trouble keeping grubby fingermarks off all that white space - managed it this time though.

I was thinking because quite a few snippets have been used this card would be good for the Playground until I realised that this is the 'alternate' week where there is inspiration from a guest designer.  Silly me, but do hop over to see the pretty card and also of course the announcement regarding the lucky winner. 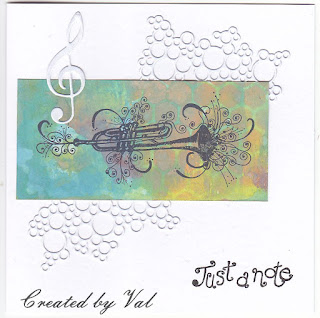