First Christmas card this year! Despite my resolve to refrain from buying any Christmas related 'stuff' (in the craft line anyway) I felt I just had to have the Santa die used on this card.  It is handy in that it is a two die set which includes a shaped backing layer thus making it easier to do the required paper piecing and layering. It has turned out to be a bit more fiddly than I envisaged but guess it doesn't take any longer than carefully colouring a stamped image.  The Santa cuts out in one piece apart from the two belt pieces and buckle so I actually cut it three times (red, white and black) before doing a bit of scissor snipping to get the details cut out from the right colours.  I didn't think it was worth cutting a yellow layer just to get the tiny buckle so just popped a tiny scrap of yellow card behind the red layer.  Once I had all the 'bits' I glued the main red layer onto the white backing layer before adding the black and white details - the face is part of the beard area and was coloured with a flesh coloured pen.  There are actually three Santas of varying sizes in the set so six dies in all.  A square of backing paper from my stash, two die cut circles and a sentiment - the large circle was randomly stamped with snowflakes.

I'm not a great fan of batch making but I think I might make a small batch of similar cards to pop into a pack with some envelopes - possibly another suitable tombola prize?  I have plenty of bits and pieces of Christmas papers about so they will be 'the same but different' - varying colours of the backgrounds. Onward and upwards now to make the rest of the batch! 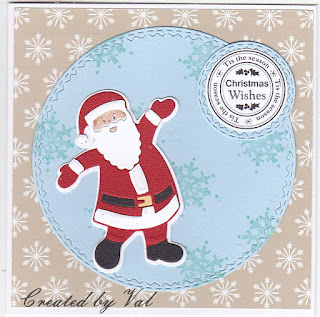 Santa Die - from Tonic - actually a trio of Santas in varying sizes
Background - paper from Stampin' Up (not this year's design)
Greeting - from file on computer, not sure of the source (had it ages)
Circles - Sizzix dies with stitched detail
Snowflake - very old wood mounted stamp with no name

I have a floral card to share today using a selection of die cuts and bits and pieces of card from my bits boxes.  Apart from a scrap of green for the stems and blue for the top layer of the vase I've managed to use up just a small part of my white card 'mountain'.  The background paper was from a pad which seems to have lost its cover; the flowers were cut once in green then again in white and the
white areas were snipped off, touched with glitter and then popped on top of the stems.  The vase is a two layer die.  An oval of white card was cut and embossed before dusting over with some green ink using a brush for a delicate effect.  A larger white oval and trellis border were added along with a simple greeting popped onto matching punched labels. 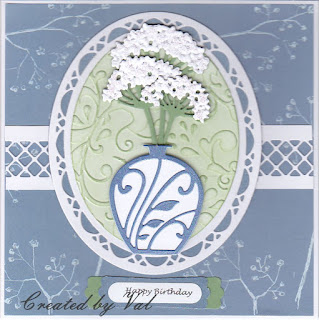 I've been having a fairly serious tidy up and sort out of my craft room and shock, horror, have actually ditched a few things which I've not used in ages (it was hard though!!) AnywayI found a scrap of 'Pixied' watercolour paper just large enough to cut a butterfly so decided rather than throw it out I'd make another card for the Butterfly challenge where the theme is KEY and/or VERMILION.  This is where I have to confess that it was my intention to cut the plain red  for the top layer of the butterfly and the bottom layer would be the scrap of paper coloured with Pixie Powders.  In a moment of inattention I managed to cut them the opposite way round - nearly gave up the whole idea - but then I decided I quite liked it this way and added three red gems for the body.  The scrap of blue spotted paper was in one of my scrap boxes and luckily I found a larger piece with pretty well the same colours.  The sentiment was stamped onto a white square, layered with red and blue; finally three tiny banners were punched from the last of the red card to add a bit of interest to the layout.  The edges of the papers were sponged with red Distress ink.  I'm off next to see what other people have made of the key/vermilion idea - well worth a look now and again to catch up during the challenge. 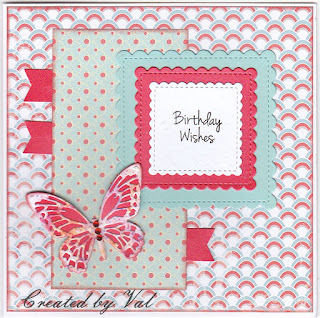 I reckon one of the reasons some people have a problem with making cards for men is that there is such a lot of sport or drinking 'stuff' out there but not all gents are into sport or drinking.  I've made this fairly quick male card mostly using up small bits and pieces of paper and card and a die set. I used background paper from a script pad which I've had a while; a die cut kraft card circular frame; a scrap of fairly plain paper from the same pad which I over stamped with a dictionary stamp; another piece of the same paper was cut with a banner die for the die cut sentiment and finally some tiny scraps of card for the specs, tash and bow tie.

Summer seems to have returned but thankfully it isn't as hot as it was a little while ago. 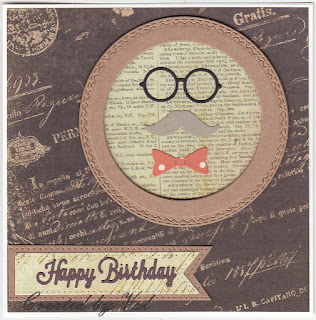