This is the last Bah Humbug challenge for this current year and quite appropriately they have called it 'feeling the blues'.  I dithered between making two different cards and as I just couldn't decide I thought I would post both for this final week (until next year that is - goody).

This one uses the really cute penguin from Polkadoodles which appears in several forms on their various CDs and I also used a little matching border. As he is wearing a Santa hat I thought the Ho, Ho, Ho sentimet was good  here. 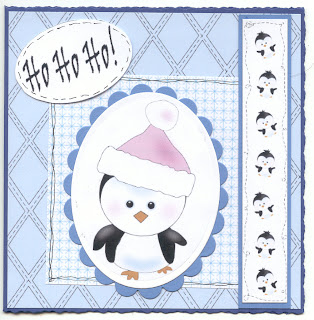 The second one is a twisted pyramage from a Popcorn the Bear CD with some snowflakes and Cuttlebug embossing.  Both cards are on blue backgrounds from my blue oddments box - yes most of them are colour coded!! (well sort of anyway). 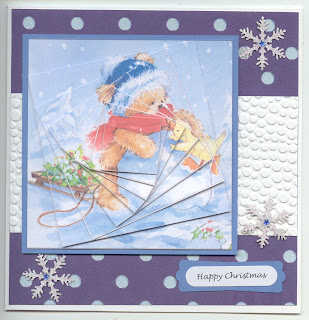 I've not had anything much to post for a few days but haven't been idle.  I've been going through my stash of larger beads this time and sorting them out, finding that I have quite a few 'orphans' and have used some of them on handbag charms, luckily some of them were twin 'orphans' and could be made into earrings.  Here is  a selection of what I've been making.  All this activity has meant no time for stamping or making cards - if only one could acquire a few more hours in each day. 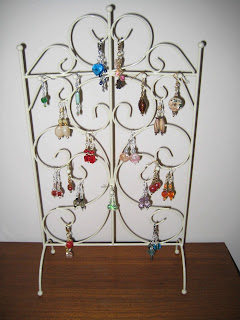