Time to visit the Playground once again and this time I'm taking along a Christmas card on which I've used a selection of snippets.  I started by die cutting the tree and its backing from snippets of silver and blue card, followed by a  lighter blue circle with a slightly larger dark blue one - snippets again.  I used up the remaining snippets of silver and light blue to cut leaves and flowers to assemble into a little posy.  Background paper was an off cut from a paper pad from several years ago.  The poinsettias were brushed oiver swith Wink of Stella but I doubt that shows up in the picture as well as it does for real.  There is a clever guest designer in the Playground this time as well as a cute card from Di with the usual opportunity to go into a prize draw.  If you visit you will be able to see this and find a link to the guest designer so why not pop along. 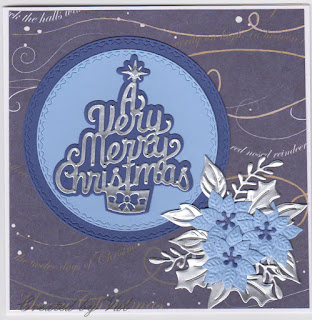 Tree - die set from Tonic
Poinsettias - dies from Marianne - had them 'forever'
Foliage - from set of dies given free with recent magazine
Background - paper from Papermania I think
Posted by Aquarius at 08:56 7 comments: