Well I've had such a hectic week and I've only just about made it with my Less is More challenge this week which is to make a one layer card with emphasis on the sentiment.  I decided to make a scrapling this time  - for those who may not know (and I didn't until recently) this is a small card made from the scrap left over when you cut a square card from an A4 sheet.  Yet again I've been tempted by a set of free stamps on a magazine - these are from Pink Petticoat and this is just one of the sentiment ones stamped with Versafine and coloured with Copic pens.  This was incredibly quick to make but would you believe that as I was putting the stamp back in the packet I dropped it into my rubbish bin which was full of all the usual tiny scraps of paper, backing strips from  DS tape and all the other scrappy bits I throw away.  As the bin was quite full it took me far longer to find the tiny clear stamp than it did to make and colour the card!!

Today's card has a row of cupcakes cut using a Papermania die which seemingly has hundreds of tiny pieces on it although in reality it isn't quite that many but there are several bases, icing pieces and lots of cherries, candles etc so this means putting tiny pieces of card on the die to get the various colours.  The iced sections were cut from coloured paper/card and then run through a tiny Xyron sticker maker (the X-shaped one) and then glittered. Background paper is also from Papermania as is the scalloped border (another die).  The sentiment was produced on the computer and cut out using a Nellies die.  The flowers were cut and embossed using a Nellies flower punch and these were glittered by the same method as the icing sections. This card was another of my demonstration samples. 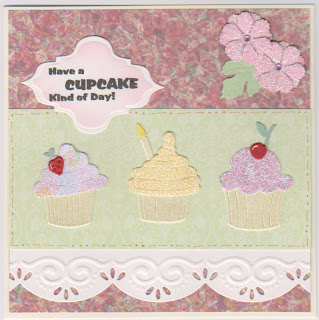 The folks at Bah Humbug this week are asking for candy canes which has caused me a bit of a problem actually finding any as I knew I certainly don't have any stamps with them so it was another trawl through seasonal CDs.  I've used an elf from Polkadoodles Jingle Jangle Christmas and cut out a separate candy cane from the same CD for him to hold; there was also a suitable border on the  CD and that is where I found the background paper.  The greeting was printed from My Craft Studio. 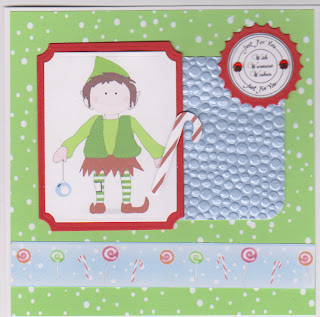 A Hoot of a Day

There always seems to be something so appealing about owls and this little chap was die cut using a die from the Papermania Forest Friends range and because all the pieces are on one die (apart from the eyes and feet) I cut out a set in brown and another set in Kraft card and then I could mix and match to make two owls.  This one has been added to an easel card - background paper is from Kay & Co and he has been popped onto an embossed tree (Crafts Too embossing folder).  I added some quilled flowers made using X-cut quilling dies and the message was stamped onto a Spellbinders fancy tag using a stamp from Joanna Sheen's owl stamp set. 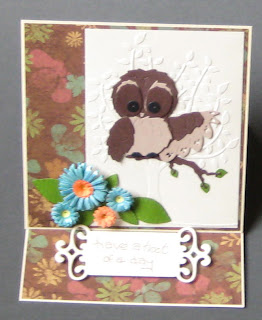