The challenge on the Butterfly blog this time is the word KEY and/or the colour VERMILION.  I'd been working on some background pieces using Distress Oxide inks and it so happens I'd been going for greens/blues so this time I've only managed to comply with the KEY part of the challenge.  The background was done with the Oxides before applying some normal Distress ink and a little white acrylic paint using stencils.  Some text was over-stamped in black onto the background as well as the sentiment; the two layer butterfly was die cut using a left over piece of the background card for the back layer and a key was die cut from black card. 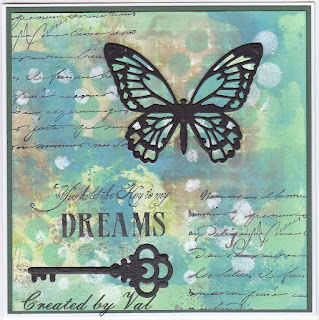 I'm sure most of you are aware of my addiction when it comes to magazine 'freebies' and I have to confess that sometimes it is a while before I get around to actually using them (if at all sometimes!!). However I've been using the ones which I picked up recently and here is another card which incorporates the free embossing folder, an image from the free papers supplied and various die cuts.  I've also used a couple of dies from my collection to add to the scene. 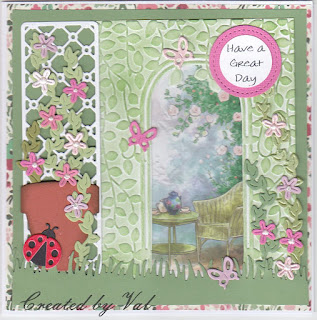 I started with a square of green card which was layered onto a square of one of the pretty papers in the set.  The archway was embossed onto some white card and sponged with matching green ink before cutting away the actual arch so that I could pop one of the free images behind.  The trellis was die cut along with a good selection of flowers, butterflies and leaves.  The grass along the bottom was cut with a die from my collection as was the large flower pot and a ladybird.  The trellis die wasn't really long enough for this card so it was cut twice and joined - hence the flower pot to hide the join - cunning or what?

Embossing Folder - free with Die Cutting Essentials
Trellis, flowers, leaves, butterflies - free with same magazine (also free papers and images)
Flower pot - die from Joanna Sheen
Ladybird - die from my collection, not sure of source but I've had it a long time
Grass - die from Dienamics, My Favourite Things
Sentiment - from computer popped onto stitched circle Stampin' Up
Posted by Aquarius at 15:09 4 comments:

I was given two small box frames to decorate and it occurred to me they would probably be acceptable as Tombola prizes so I had a bit of a play.  The first one is fairly simple with three stamped and die cut feathers on a border strip backed with an embossed piece of card. 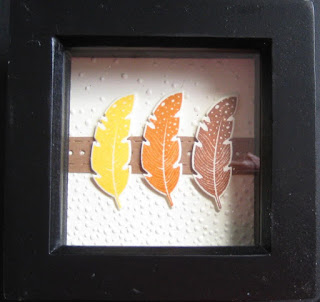 The second one is more pictorial using some free dies (yes another of my magazine purchases although I came back from shopping today without a magazine!! I used a piece of sky/cloud paper as a background, stamped with the words.  A scrap of card was stamped with a woodgrain effect before popping on the trellis die and adding leaves, flowers and butterflies.  Some die cut grass and a couple of stamped flowerpots (cut out with scissors)

Image size of both these frames is only 3" so quite small areas to decorate. 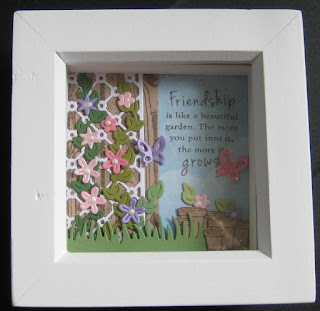 Well actually more than one problem - my regular readers will probably remember my story about the gift box and my mad behaviour measuring soap and other items in the supermarket - HERE.  A friend very kindly gave me some smaller tablets of soap which she hoped I could use and then yesterday I saw a taller version of the box while watching a Tonic programme on Hochanda.  Unfortunately there wasn't a demonstration or any information as to how this taller box was made and a quick search on the internet didn't come up with the answer either.  Not to be beaten I had a try with some odd pieces of card and managed to work out how to make the taller box so I then did a 'proper' version in some nicer card with toning colours for the decorative panels (needed twice as many of those).  I've now folded a nice facecloth into the bottom of the box and popped one of the soaps on top - hey presto another prize for the Tombola stall.  Having a taller box will have widened the choice of items to pop inside.

This Tombola will be at a quilt exhibition in September and the money raised will be going to our local Hospice. It was decided to move away from the Bag Tombola idea which we've done for a few years (members made a selection of bags as prizes) and try a general stall with a variety of more general prizes - I reckon we've probably flooded the market with bags!! 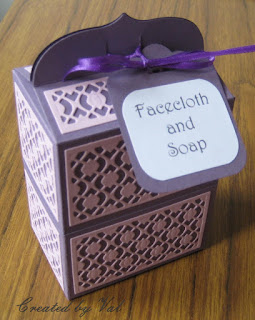 It is time again for the fortnightly challenge in the Playground where I imagine it has been very hot for most of the past week. I see it is a week since I last posted and  I'm sure I'm not the only person bemoaning the waste of crafting time because it has been too hot to do anything much apart from trying to cool down which was virtually impossible.  I've done a fair bit of reading and solved crosswords and Sudoku puzzles rather than being completely idle! Fortunately the temperatures have dropped a bit and I managed to make a card yesterday which, apart from the card blank and one base layer has been entirely made using snippets and left overs from other projects.

I started with a 7" white card blank, adding a die cut square which is slightly smaller.  I then set about scrabbling through my bits boxes to find snippets of card the same colour (Rich Razzleberry, a favourite of mine) and also some snippets of white Centura pearl card.   I had a pile of watercolour papers which had been coloured using Pixie Powders and also the last remaining die cut flowers left from a recent project. Four 'trellis' pieces were die cut along with four backing pieces from the same die set - yet another magazine freebie.  I pulled out a doily die which hasn't seen the light of day for a very long while, layering this onto a white scalloped circle with another smaller one on top for the die cut sentiment.  Going through some of my older dies I came across another neglected set which I've used to cut some leaves to back the flowers.  Would you believe I actually saved the waste shapes from the trellis die and you will spot three of them as flower centres - you don't have to be mad, but then maybe you do ... LOL.

As always it is well worth visiting the playground to see the pretty card made by Di and maybe you could use up some of your own snippets to make something - another opportunity to go into a draw for a crafty prize. 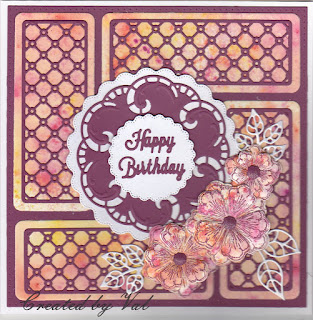