G is for Glimmer Mist

For my G alphatag I decided to go with Glimmer Mists (with a touch of gold)  as I couldn't think what stamps beginning with G  I might have from Chocolate Baroque which would be suitable.  The white tag was sprayed with two shades of glimmer Mist using masks to give interest.  I then stamped on a scrap of sprayed card and gold embossed two perfume bottles from CB Dressing Room set and the wrought iron effect shelf was also from the same set.  The bottles were cut out and put on with foam pads.  The flowers were made by punching shapes from some Guild papers which I've had for quite a long time (I hoard them because they are lovely).  A little gold glimmer mist was sprayed onto them and two Marianne die cut leaves were added.  It will be really interesting to see what the other participants have come up with for their three tags this month and of course three will be winging their way to me in the post shortly. 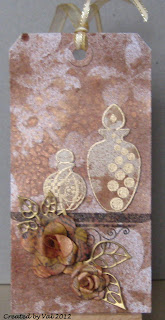 F is for Fantasy Flowers

Over on the Simply Stampin challenge blog they are giving us a colour scheme which is shown here - I've had to improvise a little as I didn't have the exact colours but in the main I've used SU products.

I used SU kraft card for the base card (nearest I had to crumb cake) and the papers are from Everyday collection.  The image was stamped from the Fresh Vintage set using waterbased brush pens and cut out using Nestabilities.  A sentiment was produced on the computer and punched using SU punches, the addition of a matching ribbon and tiny flower charm and that's it. 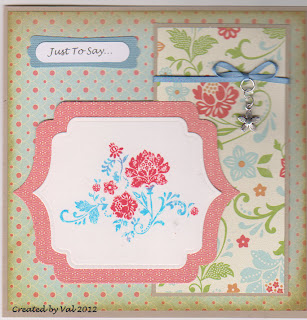 A Spring Thank You

We are still on a Spring theme at Make My Monday but this week they would like to see either a card for Mothers day or a Thank You so I've opted for the latter and gone for Spring colours using papers from Funky Hand Craft the Year Away CD (the March collection) and I think I'm just about in time for their challenge as well where their theme is Flying High.  The stamp is from Papermania and the butterflies were cut and embossed using a Sizzlets die from Stampin Up. 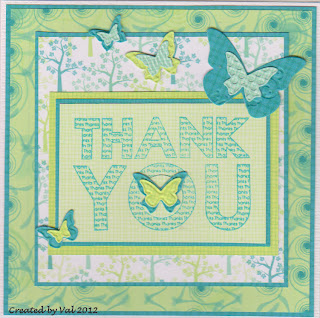 E is for Enjoy

It's time to pack up and post this month's tags for the Alphatag Swap and I just remembered in time to scan/photograph them before I sealed the envelope.  This one is E for ENJOY and also for EMBOSSING which I used as a resist on black card with acrylic paint using one of the Brocade Stamps by Chocolate Baroque.  The swirl was cut from grunge board and coloured with Distress ink, then rubbed lightly with some Treasure gold.  The words were produced on the computer using My Craft Studio. There were three letters to do this month and I'll save F and G for another day.

No, these aren't the edible kind but some peanut beads which I bought about a year ago but hadn't really got around to using them.  They are so called because they are more or less the shape of a peanut in its shell but quite small - roughly the size of two size 11 seed beads joined together and the hole goes through the narrow centre part so they sort of nestle together when threaded. Recently I came across this pattern for a bracelet which should in fact have had a second row alongside the first but I had insufficient 'peanuts' to complete another length. The beads along the outer edge of the strip are the peanuts and the others are rondelles and seed beads.

I've not quite decided if I like this enough to make it again but it was worth doing if only to use these particular beads in something rather than have them sitting around in their packaging.  Varying shapes of small beads do appear from time to time and sometimes I'm tempted to try them but I usually revert to using the more conventional seed beads which I think have more potential.  The latest ones to appear seem to have two holes in them and at the moment I can't really see how they would be used but no doubt some patterns will be in the bead magazines in due course and I might just be tempted again to try something different. As these beads have been lying forgotten in my stash I hope Judith won't mind if I pop this onto her Forgotten Friday challenge this week.