I'm putting this card up quickly today because I've heard some people seem to be having posting problems and I said I'd have a go to see if it's a general problem this afternoon. The stamps are from Chocolate Baroque colouring was done with Polychromos pencils.  Backing paper was from by bits box and I used a brick wall embossing folder (Sizzix) and some Spellbinders dies. 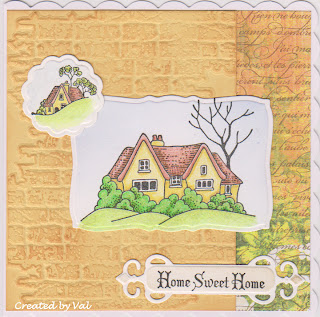 I can hardly believe this challenge has been going for a year but it is an anniversary over on St Lukes blog so do pop over and see what they are all about. This month they are asking for cards with BLING by way of celebration so I've stamped a quirky tree using a Polkadoodles free stamp which came with a magazine a while ago and coloured with Promarkers.  Some friends and I were looking at (and buying) border punches at the weekend and we were joking about keeping all the little 'waste' pieces to use on cards and this is exactly what I've done here - saved the little punched out flowers and added them to the tree with bling gems in the centres. Backing papers are by Papermania and of course the border was made using the Tonic punch. The circles were cut with Nestabilities and layered onto a Marianne die cut; sentiment printed on the computer. 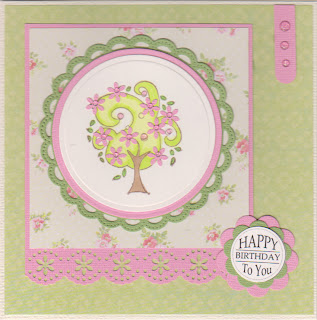 I've been keeping an eye on the Tim Holtz tags of the month and at last I've actually got around to having a go.  This one is based on his April one and you can see the details on the blog section of his website here.  As usual I didn't quite have all the items he used so a bit of improvisation was necessary.  The background text stamp on the tag is En Francais from Stampin' Up, the little bird is from a set by Chocolate Baroque and the 'dream' ticket is a stamp by Creative Expressions.  The background paper on the DL card is from Papermania  and has been sponged to match the colours on the tag - ribbon was also dyed with the same Distress colours. The embossing folder used and the tree branch die are from Sizzix. 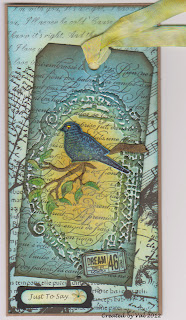 We are still on a male theme at Make My Monday and this week they specifically want to see male sports or hobbies which made me wonder just what I had which might fit the bill.  I went through quite a lot of my stamps with no succes so turned to the many files of digital stamps stored on the computer some of which I've had for ages and I'm afraid in the early days I wasn't good at recording the source.  Eventually I've ended up making two cards and I can't really decide which I prefer or if in fact if I really like either of them - mojo seems to be off on a holiday again!! The first one is from some images called George at Work (source unknown) and I've chosen this happy gardener.  Backing paper is from My Mind's Eye with some die cut Nestabilities and embossed card using a Sizzix folder. 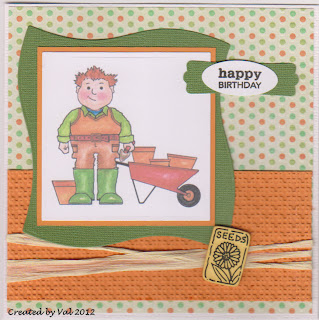 The second one is a cute image of Magnum and Lily by Ladybug Crafts Ink coloured with Coloursoft pencils. Backing paper was printed from Polkadoodles Definitely for Men CD with the addition of some Coredinations card embossed with a Cuttlebug folder and sanded to show the kraft core. I'm beginning to wish I'd not added the raffia bow but it is well and truly stuck with glue gel and I really thought it needed something in that corner. 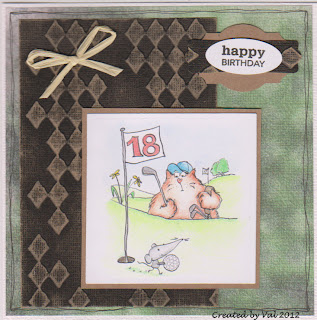 Yet again I seem to have managed to come up with cards suitable for Judith's Forgotten Friday challenge - the Magnum image I've had for quite a while and not actually printed before and theGgeorge images go back several years and the file hasn't been opened for absolutely ages but now I've remembered them there are several others in the set which are good for male-orientated cards so I will be using them as well.

The Simply Stampin' team have provided us with a sketch this week for their challenge.  I used a flower stamp and word from the Bloomin' with Beauty stamp set and a piece of SU backing paper from my stash.  The flowers were coloured using Polychromos pencils and the centre one was cut out and layered up for a bit of dimension. 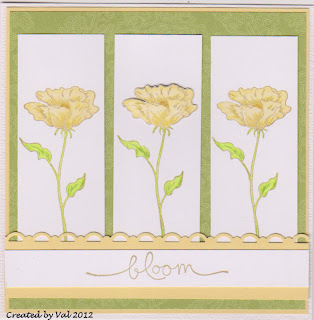