I do like to have a few cards ready which aren't for any specific occasion and this is one which I made yesterday using dies which I have to admit hadn't  been out of their packet since I received them -  although I must say in my defence that wasn't too long ago!

A piece of purple card was cut to size before embossing and the elaborate birds and flowers were cut from some white pearl card.  There are actually two dies which make up the circle and there is no outer cutting edge as such so once cut I then used a circular die slightly larger to form a frame.  There is also a small bird die in the set which I used as well and another die (not in this set) was used to cut the wording.  The circle was backed with some patterned paper cut out with the plain circle die and a border punch used with scraps of that paper to get some tiny flowers which I glued in the centres of the die cut flowers to add some interest.  The flowers are actually the 'waste' if the border die is used as intended and I usually rescue them whenever I punch a border but there were none of the right colour in my little 'pot of waste' which lives on my desk. 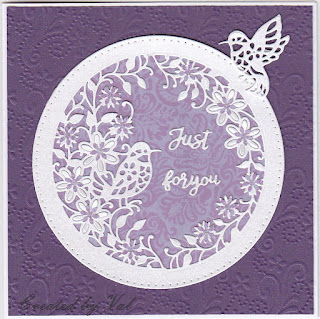 I don't really make resolutions but I aim to try and keep up to date with my blog and also visiting and commenting as much as possible on the ones I follow although unfortunately other things do sometimes have to take preference as we all know.  Anyway I've started making to top up my box  of cards which I sell for charity and some categories need a few extras to give people some choice.  I dug out a couple of die sets and cut the couple and heart using pearl card before finding some suitable background paper.  The next move was to go through my scrap boxes for some toning purple card to finish off the shapes and to die cut the wording.  A length of purple ribbon and a couple of matching gems complete this anniversary card. 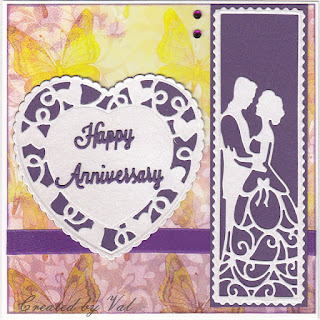 Dies - from two sets of dies by Tonic
Words - dies from Crafter's Companion
Posted by Aquarius at 08:26 1 comment: