I find that making cards such as this Christmas wreath card  a good way of using some of the smaller scraps of card which I can't bear to throw away.  The background was made by running a piece of white card through a wood grain embossing folder and then using some Distress Oxide ink as a wash to give it a bit of uneven colour, finally brushing on a darker shade to bring out some detail.  This produced a suitable background for the rustic style of wreath with a selection of die cut sprigs and flowers.  The 'berries' on the sprigs were made with liquid pearl drops and left to dry thoroughly before making up the card.  A die cut sentiment and that's another Christmas card done and dusted. 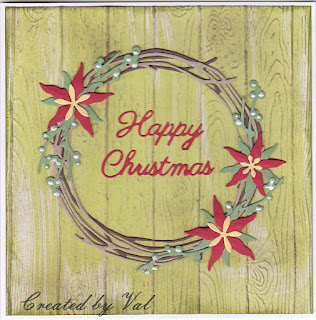 Time to visit the Playground again for the latest challenge and today I'm taking along two cards but of course they will count as one entry into the challenge - Mrs indecisive here couldn't make up her mind which one to use!!  The reason I actually made two cards, which incidentally is my nod to a sort of 'batch making' which as I said yesterday I don't really do, is because I'd cut four gingerbread men and quite a few holly sprigs and only used three on the initial card.  While I still had all the snippets ready to hand I set about making another similar card to use the lonely little chap flanked by a couple of Christmas trees from the same die set.  Apart from the base cards both of these are made entirely from snippets, some of which are really tiny.

I started by stamping the sentiment direct onto the card - the Misti helped with positioning - then trimmed a snippet of patterned paper which was left from a sheet which I'd printed recently, backed with some red card.  The ovals were die cut from scraps as were the gingerbread men and the little holly sprigs; these had punched red berries (really small snippets here!).  This was repeated for the second card once I'd die cut a couple of Christmas Trees with punched stars.

The lovely Di has made a beautiful wedding card and the prize of course is on this theme - a very pretty collection which will prove so useful for the lucky winner. 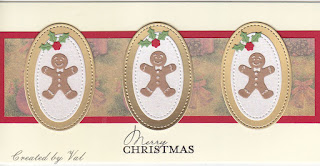 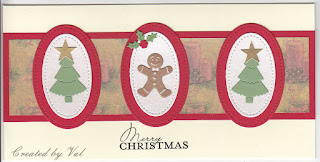 Ovals - Stitched shapes dies by Sizzix for Stampin' Up
Men, Trees and Holly - all from free die set which came with a recent magazine
Holly berries and Stars - punches used
Sentiment - from a seasonal stamp set Stampin' Up.
Posted by Aquarius at 12:33 3 comments: