The theme given for this month on the Chocolate Baroque quintiles swap was just this - 4th July which really had me stumped for a while and my original thought was to do something just using the colours until I saw some ideas on the Tim Holtz blog in keeping with the date.  I've made a rosette more or less as he had done using a Sizzix die and some tissue tape.  My next thought was celebrations, then fireworks, but of course no CB firework stamp until I remembered there was something which might do the job amongst my collection of their stamps.  I eventually used just the flower heads from a stamp in the Wisteria Lane collection and then sponged the card to look like night sky.  A Cuttlebug embossing folder was brought into service to make some red stripes and a silver star cut out for the centre of the rosette. A couple of words in the style of Tim's chit chat stickers and there it is - 4th July.  We submit two quintiles each month and I usually try to make them different but I'm afraid this month they are both almost the same which doesn't matter because when they are sent on to the other participants they will go separately to two people.  This monthly challenge is brilliant in that it makes me consider what stamps and other items I have which can be pressed into service for the various themes and often leads to quite a bit of 'thinking outside the box' and/or improvisation - sometimes even using stamps within a set which maybe haven't actually been inked before!! 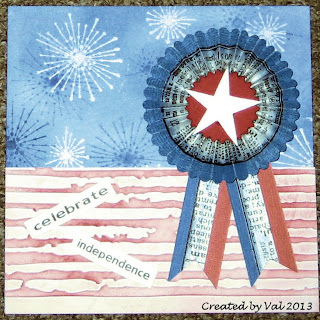 This song title is the theme of the Sunday Stamper challenge this week and Hels is asking for something relating to home.  I've used a quirky house stamp designed by Sam Poole, stamped twice and part of it cut out to add some dimension.  It was clear embossed and then coloured with Distress stains and Distress ink pads. The background was made using the same colours and was embossed using a Special Touch mask which I inked with the darker colour to transfer some colour to the white card before adding more ink after it was embossed. (colours used were Seedless Preserve and Mustard Seed).  The 'graffiti' was sponged through another mask using black soot ink and a text stamp also by Sam Poole was put onto a scrap of torn card, a little punched and coloured flower just finishes the grungy homely look. I must say my hands needed a good scrub after all that inky play!! 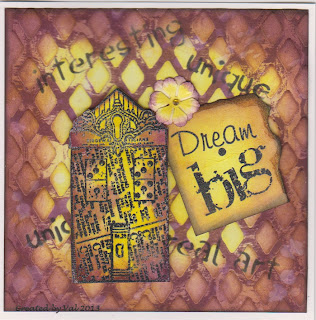 You're right it does seem early to be thinking of Christmas but the team at Make My Monday are asking for a Christmas card for their challenge this week. I suppose if you have lots to make it does make sense to start in good time rather than be in a last minute panic.  I've used an image (layered onto Spellbinders circles) and backing paper from Docrafts, the sentiment was printed and cut out using a Stampin' up punch and the fir branch and poinsettieas were cut out using Marianne dies - a little gold glimmer was added to the flowers.There you have it, my first seasonal card this year and if you need the impetus to make a start on yours it is worth taking a look at the inspiration from their design team. 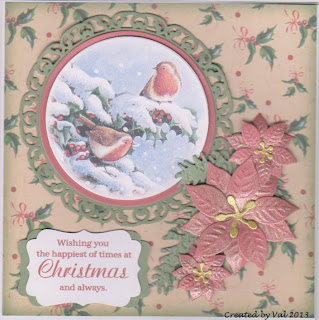 There is a new challenge starting at The House of Cards and you can read all about it if you follow the link.  There will be opportunities to try out various techniques as we go along which should be great fun I'm sure.  This week they are asking for a cute and fun entry to include certain colours and I've used a cute pirate image from Polkadoodles which would make a great card for a boy - I've followed the colours as closely as I could without going out to buy any more coloured card. Backing paper is from my stash (Papermania) and the dark panel was embossed using a mask and then rubbed with metallic gilding wax.  Some lines were doodled around the edges for interest and a couple of buttons added in the corners. Take a look at what their design team have come up with and maybe have a go yourselves. 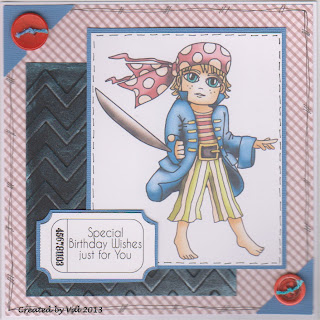 I have a wedding card to share with you today using a couple of cute owls from Polkadoodles - I arranged the two images so that they look as if they are holding hands - ahh!!  Backing paper is from a pad of wedding papers I've had for ages, the heart behind the computer greeting is a Marianne die and a Cuttlebug hearts embossing folder was used on some Centura Pearl card.

It's been a lovely sunny day today and I should have been mowing lawns but decided it was maybe a bit to warm outside - perhaps this evening if it cools down... but then perhaps not!! 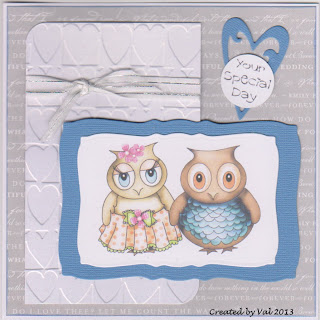