Earlier this week I received a lovely box of crafting goodies from an online friend, including a couple of stamp sets which I would guess may well have been lying around unused for a while so I've used one of the sets to make a card for this week's Forgotten Friday challenge.  The stamps were a set of two-step ones from Stampin Up and I first used some of them to make a small 'masterboard'; I then cut out a circle from this using a Nestabilities die, then stamped some of the two-step elements and also cut out using smaller Nesties.  These circles were then popped onto matching scalloped circles and turned into 'flowers' to make up the topper.  Background paper is also from SU and I used an EK success punch for the 'ground' - the ribbon is from Papermania and has been in my ribbon box for a while. 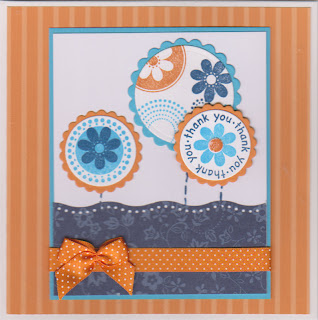 The July challenge for St Luke's Charity challenge is a colour theme - black and white with one other colour. I've chosen green as my extra colour and coloured the image in the style of a photograph produced in black and white with spot colour in one area.  The image of Audrey in the rain is a digi stamp which probably came as a freebie a while ago and I'm afraid I don't know the source - the ticket was another digi image of unknown origin also so apologies to the designers.  Background papers are fron Funky Hand and I've just added some Prima flowers with Marianne die cut swirls. 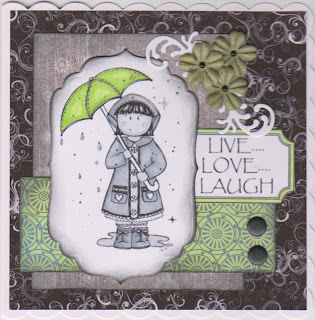 I've just discovered another challenge blog - Make My Monday - and their theme this week is vintage using brown, cream and either pink or blue.  I decided to go with blue; background paper is K and Co from my stash; birdcage is a Marianne die cut and the butterflies from Chocolate Baroque were stamped and cut out; a punched border in Kraft glassine and a bit of cream lace complete this card. The Martha Stewart punch I used didn't work too cleanly on the glassine (they are better cutting card) but I think this just adds to the vintage feel. 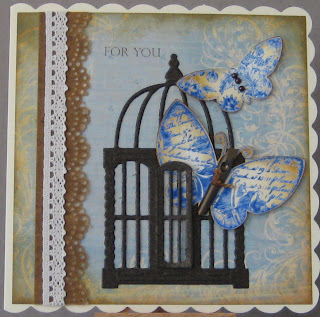 Acetate - not one of my favourite things to work with and that is the challenge this week at Bah Humbug but I have managed a simple card. I used some printable acetate with an image of baubles from a My Craft Studio CD, attached it with brads to some white glitter card and added a computer greeting on  punched shapes. I'm sure you will find lots more interesting cards if you pop along to their blog to see what other folks have done with their acetate! 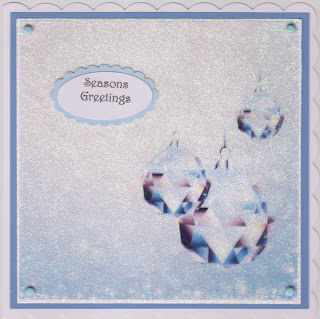 This cute bunny digi stamp comes as a freebie from Pink Gem Designs and their site is well worth a visit for digis or regular stamps and other goodies.  Image was coloured using Copics, background papers are from Kay and Co; I've added a lace border cut with a fiskars punch; a Cuttlebug fancy corner and a sentiment produced on the computer. 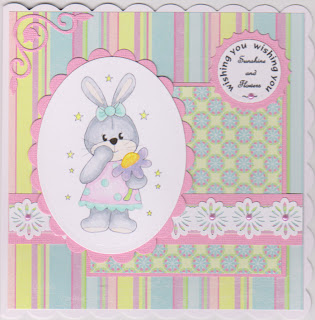