The other day I used some stray die cut mice and today I have a card to share which has used up some stray flowers and leaves from the tray on my desk.  I started off by using a large octagon die to cut the base card - makes a change from my usual square ones!  Next I cut more octagons using smaller dies using white and different shades of green card.  A few flowers and leaves were arranged in a little spray, everything layered up and glued and there we have it - yet another card for my ever growing supply of finished ones.

The sun is shining this morning and it looks as if we are in for a pleasant weekend, weather-wise anyway even though it is quite a bit cooler than of late.  Enjoy 😷🙂 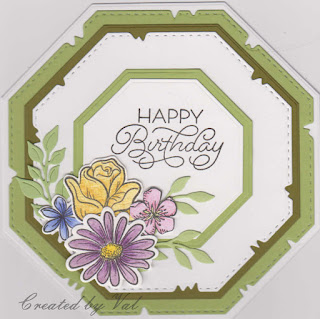 I thought these tulips might cheer up someone who is feeling under the weather. The flower heads were stamped onto scraps of white card using yellow first and then just touching around the edges at the base of the stamp with some red to give a two-tone effect. Dies were used to cut the tulips and a leaf.  Leaves and stems were stamped onto a strip of white card which was backed with some green card with a punched edge.  Sentiment was stamped onto a punched label shape 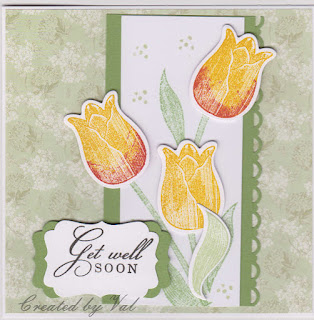 As well as always having scraps of paper or card left over from making a card often find that I have various left over die cuts and of course they all get saved.  This week I found two little mice lurking in a  tray on my desk (not real ones I hasten to add) and I guess they've been there ever since last Christmas.  I felt I should use them to make a Christmas card for this year so I looked out the set of stamps and dies along with a few other seasonal bits and pieces so that I could die cut some more bits to make a little scene.   The tree was cut from a scrap of plain card and then I stamped a woodgrain texture on it, coloured the window frames, then die cut a mouse snowman, fairy lights and some trees to go with the two stray mice.  |A scrap of blue spotted paper was used for the sky and some white card die cut into a snowy landscape.  I really should go through the plastic trays on my desk to see what other treasures there are which could be made into cards - I know there are definitely flowers and leaves as well as quite a few shapes which are left when cutting frames etc.

I have a feeling that Christmas this year will be a pretty low key affair but I think people will be glad to have some nice cards.  I hope so because I have lots of Christmas 'stuff' to use. 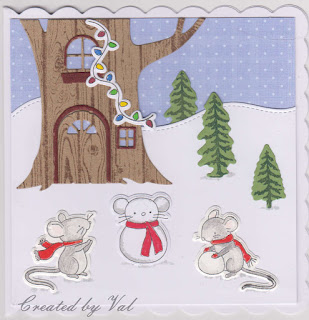 I was lucky recently and won a lovely prize in the Pixie Snippets Playground challenge - some dies, a stencil and pack of sentiment stickers so I thought it appropriate to use at least some of the prize to make a card for the current challenge.  I started off with a fairly large snippet of cream card and used the stencil to emboss the card before brushing it lightly with some Distress ink and then over stamping with a small swirl stamp.  I'd found an already cut piece of trellis which was a left over from a project made ages ago.  This was white so I inked it with the same ink so that it would tie in nicely.  A selection of smaller snippets in varying colours was  then used to cut out some flowers and swirls using the die set and these were arranged onto the trellis.  Finally a sentiment was stamped onto a scrap of cream card, die cut into a banner with a slightly larger one in brown as a backing.  Thought it just needed a little something extra so a tiny bee was die cut from brown card.

There is another great prize on offer for the current challenge so if you'd like to be in with a chance why not make a card using up some of your snippets - take a look at the inspiration card, I love it. 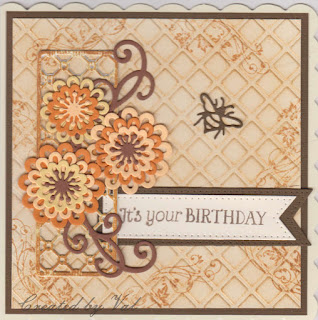