You might need dark glasses to view this card made for the current Butterfly challenge where the theme is Jagged Edges and/or Kiwi Colour.  I think I've covered both options although the jagged edges (on the sentiment) are only small.  I started with a piece of card which had been treated to some Distress Oxide inks and on this I stamped an image using Archival ink, layering this piece onto black card.  The base layer is Centura Pearl card in 'kiwi' green and was embossed to give it some detail.  Finally a sentiment was stamped and layered onto a strip of black with both ends cut using an old pair of fancy scissors - remember those from way back???  Once the inky background was made this was a fairly quick card to put together but you have to admit it is a bit GREEN.  The butterfly stamp is one which I've had for several years and I'm pretty sure it may only have been stamped once before, if at all but it is the sort of image which seems to work well on these inked backgrounds. 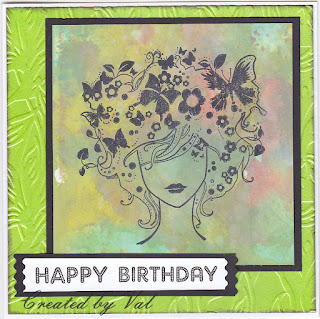 Yesterday I die cut this little gingerbread family - cutting in kraft, blue and white before popping all the tiny details back into the kraft layer with the help of a 'sticky pick-up tool'.  This is a gadget for picking up small gems and the like and I'd completely forgotten about but it suddenly came into my mind that it could be handy for picking up really tiny die cut pieces and I was right YAY!!  Of course I didn't have such a tool but managed to source one on a favourite auction site and it arrived yesterday.

Once the family was ready I then had to decide how I was going to incorporate them into a card and here is what I've come up with.  Some printed background paper; a white border strip with stamped snowflakes; a die cut sentiment and a holographic snowflake which is actually silver but hasn't reproduced too well.  The sentiment was plain white card brushed with clear Wink of Stella which looks OK for real but again doesn't show up here.  As usual details of what I've used are below the picture.

I've just spotted a mention of the Rudolph Days challenge which is new to me but I think this card might fit the bill as apparently it is 'anything goes' as long as it's Christmas. 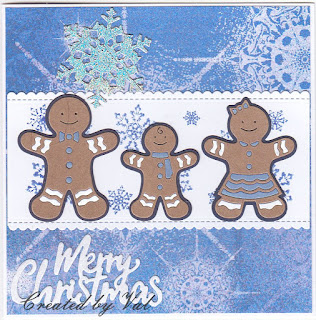 There are so many ideas and techniques around that some inevitably get forgotten or at least make their way to the back of our minds.  I was reminded recently about stamping and white embossing onto kraft card, colouring images with pencils which is something I'd not done for a while.  I have two similar, but different, cards to share today using the same stamped image in two colourways and with a selection of paper and card from my stash.  I've not bought any design papers for simply ages but the 'mountain' doesn't seem to diminish much!!  Both cards feature dry embossing and/or die cutting as well as the stamped and coloured images.  The sentiments were freebies downloaded from the generous Annette HERE and I resized them using My Craft Studio to fit a punch size that I have - printing a page of them so they are handy to punch out as and when required 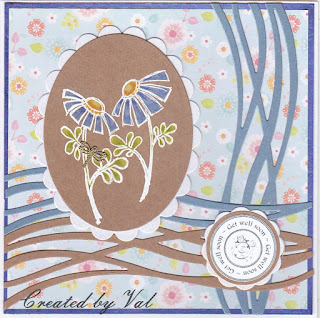 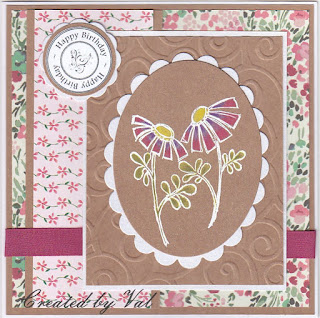 To Brighten a Rainy Day

The weather here was lovely yesterday with plenty of sunshine but this morning is grey and rainy so I'm sharing a second sunflower card to brighten things up.  I actually stamped and coloured two images the other day and decided to make two slightly different cards with them (rarely make the same design more than once).  You've already seen one of them; here is the second and this time I incorporated the flower pot and some smaller flowers from the same stamp set along with a spare fence, trellis, some grass and a couple of leaves from the die cut scraps 'pot'which sits on my desk.  Again the image was coloured with Inktense pencils and the background paper was another one from the free pack which came with the magazine.  Scissors were used to cut out the pot and tiny sunflowers which are 3D. 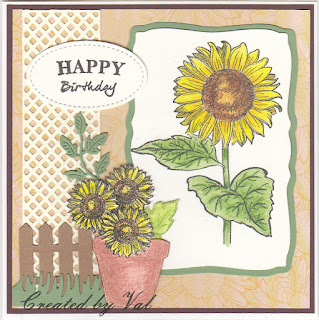 Flowers and Pot - free stamp set from magazine
Fence - cut using a free die from another set
Trellis - left over from another project, part of a Tonic die
Sentiment - from free stamp set and stamped onto Stampin' Up stitched shape.
Posted by Aquarius at 08:27 5 comments:

Inspired by the card posted yesterday by the lovely Di HERE and some useful information amongst the comments as to the best mat to use for various inky blending techniques - apparently NOT a glass mat which is what I've been using since I acquired mine!! I had a little play session with some DOX (technical term!!) yesterday and have now used one of the backgrounds for this card.  As well as the 'smoosh' technique I also did some double stencilling inspired by Karen D on her blog (scroll down to see some beautiful background ideas) - of course there are many others who do similar techniques and looking around blogland shows up a wealth of inspiration and ideas.

I cut a square of the DOX/stencilled background and then a frame of the same size, followed by stamping and colouring a die cut bird and adding a twiggy branch - only scraps of card used for these of course.  The faithful Misti came into play for stamping the two sentiments and was also handy for stamping on the bird as well. I wouldn't have attempted stamping direct onto the background without the stamp positioning gadget because it was so easy to get it wrong previously.  There are many such positioning tools around now and they are considerably cheaper nowadays but heigh ho, I'm happy with mine although had I not been impatient to try it I would have saved money!! 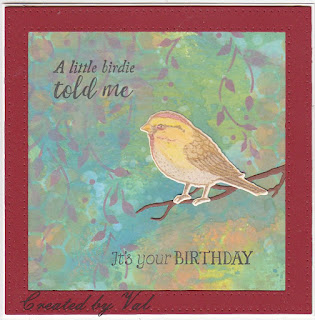 My card for the Pixie Snippets challenge this week has used all snippets apart from the base card.  A fairly large snippet of cherry red card was lying around after I'd used that colour for some die cutting (Christmas cards); the two separate lacy border pieces were odd scraps of Centura Pearl card; the coloured strip across the centre was a bit left from a larger piece which had been coloured with Distress ink and stencilled with leaves - I stamped a sentiment along one side of this using the Misti which is great for positioning stamps; I have a pot on my desk with lots of really miscellaneous (some of which are quite old) die cut bits and pieces and from this I managed to rescue some bits for the flower and leaf; the pink layer is a precious snippet of a really old Tim Holtz vintage shabby paper - I will be so sad to get to the real end of this pad, not much left now but I have had it for several years so can't complain.

I'd certainly recommend a visit to the Playground to see a lovely tropical themed card made using the so popular Distress Oxide inks and a clever die which I've not seen before.  No awards for guessing what is on offer in the draw this time if you make something using up some of your snippets. 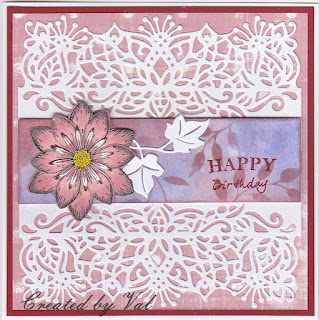