I've used the free stamp which appeared on the current issue of Craft Stamper - this wasn't an impulse buy though because I actually have this magazine on subscription.  The image was stamped twice and the moth, or is it a buterfly?? was coloured, glittered and cut out so that I could add some dimension. Background paper is from a Prima scripts pad and all the other elements were made using bits and pieces from my scraps.   A clock die cut using a Marianne die; small 'postage stamp' using a Stampin' Up stamp and matching punch; square behind image was embossed using a script embossing folder, layered onto a Spellbinders large 'postage stamp' style die cut; thank you message stamped onto a Tim Holtz ticket with a bit of splodgy overstamping. 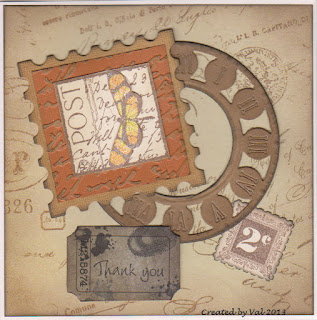 I had a lovely time yesterday getting inky and making the background for this card using distress inks and water stamping with the addition of some Twinkling H2Os.  Once dry there was some overstamping with versamark, embossed with glittery silver also used to emboss the stamped flowers which were coloured with H2Os and cut out.  This was inspired while watching demonstrations on C & C by Sheena - I just knew I had some flower stamps (from Tanda) which could produce something similar to one of her demonstrations.  I really can't recall when I last used the H2O paints but it was good to bring them out of retirement and I was pleased to see they've not deteriorated at all in storage. 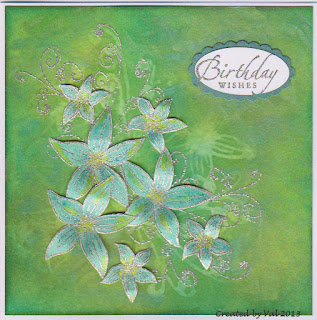 Two posts in one day - I put that down to the snowy conditions and crafting is certainly more rewarding than boring h****work. I've had another go at the Make My Monday sketch challenge and this time there is no danger of mucky fingerprints because this one was produced digitally using Docrafts Digital Designer software.  This time I've turned the sketch around and used the layout horizontally for a change. 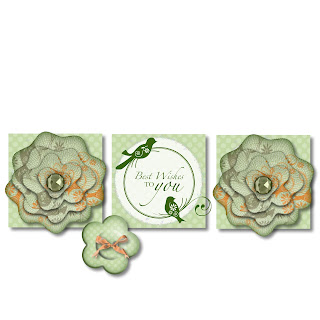 Well I guessed last week's snow was hanging around for more and it started again late yesterday - still coming down in big flakes this morning so I'm not going anywhere.  I did manage to get out for a walk on Sunday while the roads were OK and called into my local craft shop for some envelopes and a pretty border die from Joy sort of leapt into my basket!!  I've used it on this card with some embossed card, an image stamped onto patterned Prima paper and cut out with a Spellbinders label die.  The stamp is by Stampin' Up and the main backing paper is also from Prima, overstamped with a similar image by Chocolate Baroque. 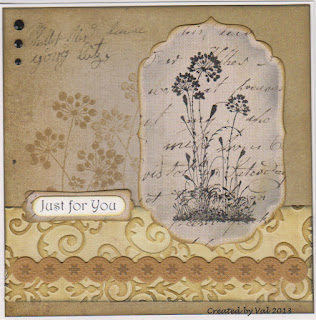 Oh dear, the challenge on Make My Monday is a CAS sketch and I'm afraid 'clean and simple' really isn't me but I've had a go anyway.  I followed the sketch and instructions to the letter - another thing they said was NO distressing!! - can you believe that??  I used a stamp by Hero Arts which is one of a set which I've had for years but sad to say not used recently; however it came to mind when I saw the sketch.  It was stamped onto plain card and also onto patterned paper which I cut out and 'paper pieced' for the flowers, adding glittery centres and  colouring the background with Copic pen.  Squares were cut out and adhered to the card blank with a punched greeting popped onto a die cut shape to match the flower centres. One good thing about this particular challenge is that it has reduced my scrap mountai, albeit by a small amount. Follow the link to see other examples from the design team. 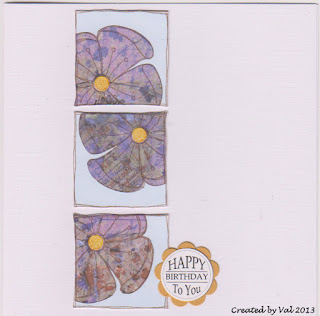 I wanted to make a get well card and as I was clearing a space on my desk in which to work I came across this frame which I'd cut especially to go on another card and then somehow it didn't work.  Rather than consign it to the bits box I thought I'd make myself use it straight away.  Luckily this silhouette stamp from Stampin' Up was of a suitable size so I stamped it onto a scrap of white card, brushed lightly with blue ink and mounted it behind the frame.  Backing paper is from Prima  and the oddment of whitewash core-d'inations card was put through the Big Shot with a Cuttlebug folder then sanded and inked.  A computer greeting punched with SU punches and there it is a fairly quick and easy card suitable for male or female. 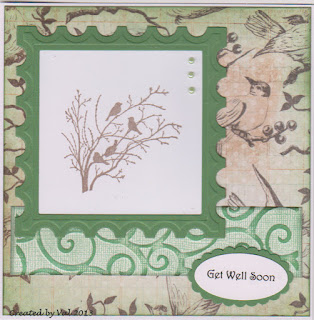 Well I've done it again - succumbed to buying a magazine which was giving away free stamps, and that was something I'd sort of decided I wouldn't do.  It wasn't exactly a New Year resolution though so don't feel too bad about it because the set of Woodware stamps with owls is so appealing. They are a decent size and so suitable for paper piecing as I've done here, or for colouring in as required. The background paper was also a freebie from the magazine and I raided my scrap boxes again and found some toning bits of paper and card to build up the layout and the owl was cut out and layered for some dimension.  The tiny flowers are 'waste' from some border punching  and yes I'm sad enough to save these in a little container - fortunately there were some in just the right colours. The owl was popped onto a Sizzix die shape which in turn has been embossed with dots (Crafts Too folder), the sentiment comes with the stamp set and was cut out with an X-cut label die.The 'doodles' around the edges were done with a black fine liner pen.

Still very chilly this morning and I hear we can expect snow flurries today - hopefully they will be very light because I really want to get out for a brisk walk later. 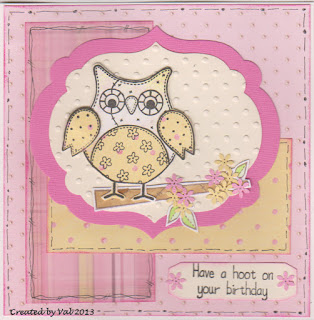 PS - I've just spotted that the theme on Sunday Stampers is BIRDS so I'm putting this card in for that challenge.
Posted by Aquarius at 09:34 12 comments: