This Art Deco lady stamp came free with the Docrafts Creativity magazine and of course I just had to have the deco embossing folder which went with the range - such a shame really that the stamps weren't sized so that the images fitted nicely into the frames!!  I had to resort to cutting the embossing through the middle and adding a strip of black card so that the image didn't completely hide the top and bottom of the frame.  That said I do quite like the effect of the black strip so nothing lost.  For some reason the scan has brightened the yellow colouring on the dress whereas in reality it is a more muted gold shade which tones well with the backing paper. 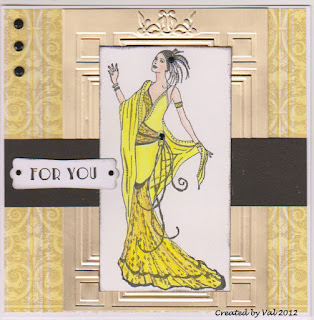 The Autumn theme continues at Make My Monday and this week they want us to use some vellum.  I came across this image on Joanna Sheen's Royal Horticultural Society collections CD.  It was printed onto both card and vellum and I've also used a strip of the matching backing paper on top of the main background of Prima paper.  The vellum was torn across and then layered onto the topper.  Edges of the papers were sponged with Cranberry Adirondack ink and the ribbon was also dyed using a pool of the ink spritzed on a glass cutting mat - fingers now an interesting shade so I really should remember not to get dye inks all over them!!  A simple stamped greeting finishes off this card.

I'm hoping the relentless rain eases off later because I  have to venture out to post off a birthday card today if it is to reach its destination on the correct day so it will be a case of donning waterproof footwear!! 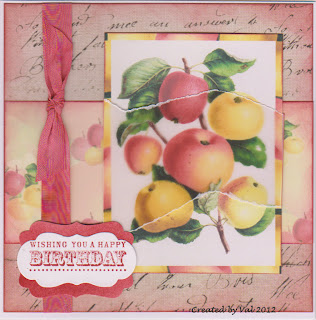 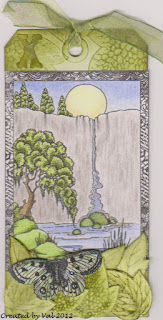