I often have times when I cut out quite a few die cuts and generally shuffle them around to see what different ways they can be used.  For this card I found I had just the white elements and also the blue square with embossed edge was loitering on my desk so I set about finding other things which would enable me to turn them into a card.  The background paper was sponged around the edges and overstamped in the same ink so that it toned with the square.  The centre image was a freebie stamp amongst a set given away with a magazine.  It was stamped twice and the butterfly cut out and layered up for dimension. The white lacy area behind the circle is actually made up of four separate dies - luckily I found just four little blue crystal flowers to cover the corners where they meet (not absolutely necessary). I was aware of the join and didn't like to see it although I suspect that a non crafter probably wouldn't notice it.  The matching corners were placed behind the square as a finishing touch.  I've made a couple of other cards today using up some die cuts so watch this space. 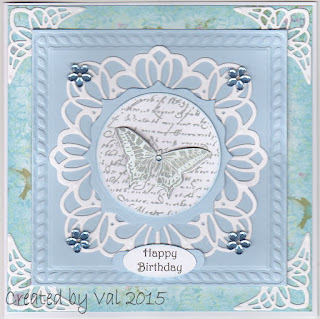 The sorting out continues (slowly) and today's card has used an image which I think came free with a magazine from Crafter's Companion.  The image originated as a fabric collage embroidery from the clever textile artist Abigail Mill and CC have produced CDs featuring her work.  I think the background paper also came with the magazine - why do I never keep all these items together??  I've added a die cut border and some pearls.  The tweed tag was in the set and I added a computer sentiment and a little punched flower. 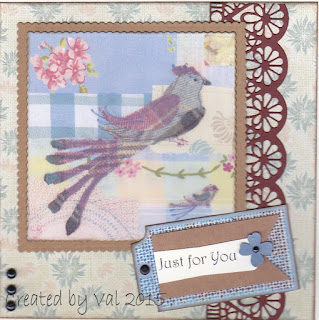 I often spend time trawling around on Pinterest to see how other folks have used stamp sets or dies which I have and this card was inspired by one of these sessions and gave me an opportunity to do some stamping.  I've moved away from my usual square format here and used a 5" x 7" card to make best use of the large background stamp.  The image was trimmed along the top with a border punch to make it look like the top of a fence. 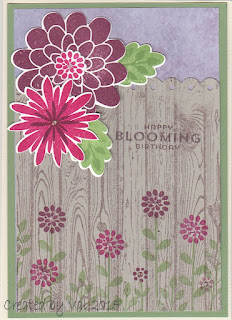 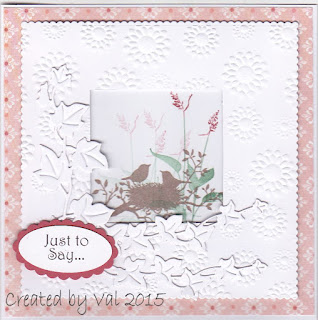