I have a good supply of cards made but noticed that I'm a bit short on ones suitable to send to men so I'm on a mission to redress the balance.  For this card I've used lots of items which I've had for some years apart from the wood grain background paper which is a recent acquisition.  A scrap of card was embossed with a clock embossing folder and highlighted with copper gilding wax. A clock face has been stamped on another piece and backed with a circle in a colour to match the embossed panel.  The cogs were cut from a scrap of card which had been coloured with spritzes of copper  spray.  Finally a sentiment was stamped on yet another scrap. 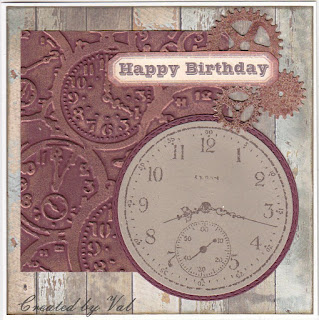 Clock Face - stamp from Stampin' Up Sense of Time
Embossing Folder and sentiment stamp - both by Tm Holtz
Cogs - dies from Papermania (Docraft)
Background - pad of paper from The Works
Posted by Aquarius at 15:22 5 comments:

I've been sent in the direction of a new challenge called 'Christmas Kickstart Challenge' with the aim of making a seasonal card each fortnight to avoid the last minute rush when December comes around and you have loads to make and very little time.  I'm sure lots of us start out with good intentions of starting early but fail somehow!!  The rules are simple so why don't you pop along and take a look.

The theme this time is to incorporate deer and this is my card ready to add to the small number I had left in the box after Christmas.  It uses an image which I'd downloaded at least a couple of years ago so I printed off some of them to use.  Image was layered onto a piece of holographic card and then I sorted out a couple of white scraps of card; one of which was embossed with snowflakes and brushed over with blue ink while the other was stamped with a greeting before die cutting it into a banner.  A snowflake background sets it all off and I simply added a holographic snowflake.

It was the lovely Jules who gave the information about this new challenge and she has made a gorgeous 'Rudolph' card. 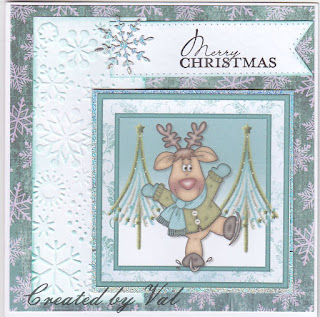 Congratulations to the Pixie snippets Playground which is 8 years old - it was originally started by Jules whose blog is HERE and Di took it on some seven years ago.  I am sure there are so many people who appreciate all the hard work which goes into maintaining this sort of thing so a huge 'thank you' is in order.

Now it is onto the latest challenge and this is the card I've made this morning using up some small snippets along with a couple of larger ones and as usual I still have a few bits left over from this card as well - never ending snippet collecting!!!  It's just as well that I decided not to make any resolutions for this year because if I had, one of them would have been broken when I called at the newsagent to pay my paper bill on Friday.  You've guessed it - I was tempted to glance at the crafty magazines, which to be fair are just inside the door so can't be avoided.  I couldn't resist getting one which had a stamp and die set featuring a cute owl with some great little sayings alongside the pictorial stamps.  There were only two dies, one for the owl outline and one for a wing (only one).

I started with a piece of green card slightly smaller than my base card and embossed with a leaf design.  Next I stamped the owl onto a piece of fawn coloured card and added a little colour to beak, eyes and feet before die cutting.  When it came to the wings I obviously had to die cut two and then they had to be stamped afterwards so that there was a left and a right so one was stamped on the front and the other on the reverse side.  The leaves and bunting were stamped onto scraps of white card and cut out carefully using scissors.  The next move was to stamp the branch onto some white card, carefully placing an oval die over it to cut out the shape, then I resorted to using the Misti to place the wording and the bunting stamp in the right place.  Finally the coloured bunting, leaves and owl were all put into place with foam pads before adding a larger oval layer and a birthday greeting to the card.

Coincidentally there is a great article in the magazine written by Jules who has made a fabulous cork board project using wine corks - if you visit her blog you will see that she didn't actually have to drink that many bottles of wine to get the corks!!!