Would you believe it ... another crafty magazine hopped into my basket in the supermarket!!  This time it was so tempting because they were giving away a set of stained glass window stamps - four in all, with two sentiment stamps and a border embossing folder.  I've stamped and coloured one of the windows with alcohol pens; then decided to use some of the smaller square dies from a set to frame it.  Often I find that the smaller dies in the graded sets don't get used as much as the large ones. Next I cut some corners from scraps of card to match the inner frame before finishing off with some matching background paper and a larger frame. 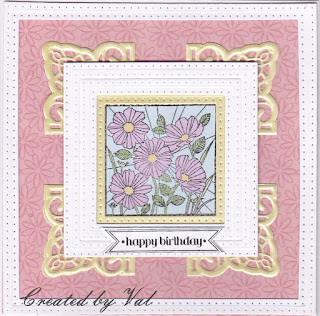 I spotted two cards made by Barb and liked the quirkiness of them so much that I searched through my stamps to see if I could make something similar.  I hope she doesn't mind that I've pinched her idea but I'm told that imitation is a form of flattery!!  I stamped my flowers and leaves onto patterned paper and cut them out with scissors before arranging them onto a text background with a greeting. My flowers don't have quite the quirkiness I so admired but this is my interpretation of the idea. 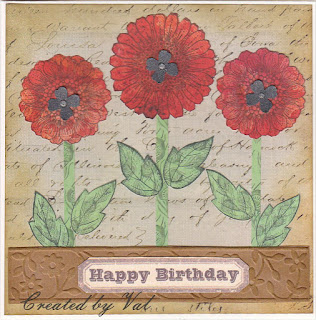 What a lovely surprise I had when I visited the Playground to see that my card from last week had been chosen as one of Di's 'picks' along with several others in varying styles so it is well worth hopping along to take a look I'd say.  For my card this week I've gone down the die cutting route, starting with a fairly large snippet of blue background, then a striplet die was used twice to cut out of the white pearl layer.  I then used another fancy die to cut out two layers in the same colours of card, followed by a couple of ovals for the sentiment which I did on the computer.  It so happened I had two stray stamped and embossed flowers which I popped on along with some matching pearls.  Di mentioned that buying dies to match stamps is not always necessarily the best option and I'm inclined to agree, especially when the outlines are easy to cut with scissors.  This means of course that you can cut closer to the outline without ending up with (often in my case) an uneven white border around the design and money saved can then be spent on something else crafty!! 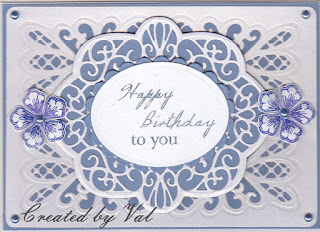