Something Beginning with B

While visiting some of my favourite blogs I spotted a challenge from Allsorts and they seem to be playing a game of 'I-Spy' and the letter is 'B'.  I was just about to post this card which as it happens has a bird on it so I guess this would qualify.   I stamped a large dictionary page as background before over stamping with some flowers and a branch.  I then stamped, coloured and die cut the bird and punched out a few tiny flowers from scraps of card coloured using the same ink as was used to colour the bird (Distress Markers).  A fancy die cut which was lying around just seemed to fit the space at the side and a stamped greeting was cut out with banner dies with the bottom layer being white card coloured with Distress ink to match the flowers. 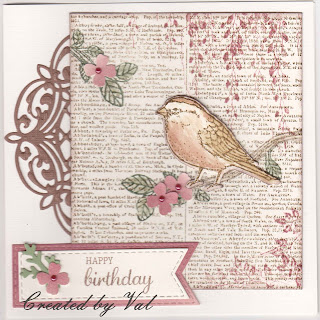 I normally make something specifically for the Pixie Snippets fortnightly challenge but this time I'm entering something made for a challenge set by the patchwork and quilting group of which I'm a member because it uses eleven and a half snippets of yellow fabric - don't ask!!  I will however explain why such an odd number in case any other groups would like to give their members a similar challenge so bear with me.

Here goes - we were told to use black fabric measuring 10" x 30" as our background and next we had to pick (lucky dip style) a colour, a shape and a number from three pots each containing ten  folded pieces of paper - my draw resulted in having eleven and a half yellow circles to work with.  The project was to be kept a secret until completed in time for the big reveal which was last Thursday which means I can now share a photo of my efforts.  There were some very ingenious ideas and some forty or so of these hangings will be displayed at our next quilt exhibition and possibly at a Crafts4Crafters show in the autumn as part of the South West Quilters stand.

As I had raided my scraps of fabric to find the yellow snippets and also found some green and purple to add to the mix I reckon this will qualify for the Playground this week.  The yellow circles were made into Suffolk Puffs (or yo-yos for American readers) and I then cut out a stem, leaves and a couple of butterflies so that when applied to the background it would, hopefully, pass for a flower - maybe a hollyhock??

I hope you all have a lovely Easter weekend - weather looks quite nice at the moment but definitely not as warm as it was a week ago.
Posted by Aquarius at 09:09 6 comments: