I popped my second  ICAD into the post yesterday for my other swap partner.  For this one I again used Distress stains and inks for the background with texture paste applied through a mask - finally adding a little overstamping.  The postcards were downloaded from the internet so I was able to reduce them in size to fit this small format. I used stamps to make a couple of word strips similar to the chit chat stickers, added a birdcage charm and some die cut tiny birds and that's it, my other ICAD to share with you as promised in this post where you can find more details and the link if you don't know what an ICAD is. 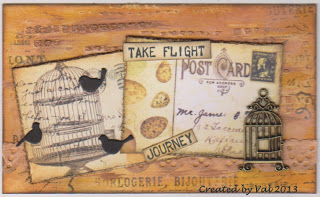 Id been admiring cards on the blog of my friend Jill where she has used Woodware 'huge' stamps with various words and at the weekend she had pointed me in the way of a supplier offering free postage so I just had to indulge!! The package arrived yesterday which I thought was excellent service given that it was Bank Holiday weekend. I'd decided that the birthday one would probably get the most use but on reflection I might have chosen one with less letters, particularly after I spent ages cutting out separate letters from printed papers to paper piece this card.  Papers were all printed from Funky Hand Colour Me Happy collection and what is really good about theirs is that you can take papers onto the workspace and reduce them so that four fit onto an A4 page (they also just fit the stamp then  which is handy). I also printed some larger pieces of paper for the layers on the card and as the sentiment really is 'huge' it didn't need much else for this six inch square card.  I wish I'd have more use for something like 'golf' or other four-letter word (polite ones obviously) but I just know I'll be using this birthday one in lots of ways  rather than leaving it lurking in a drawer so thanks Jill. 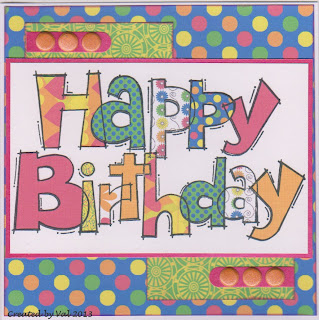 The lovely Astrid has kindly organised an ICAD swap and as I'd not heard of them before I decided to take part - an ICAD is a piece of artwork measuring 5" x 3" and you can read all about them on Astrid's blog if you follow this link.  This is the first one I made and it is heading off into the postal system today for one of my swap partners. Card was coloured using distress inks with the addition of some texture paste applied though a stencil mask.  The image is from Nice Crane Designs who have some wonderful imagery available and I've simply added some scraps of die cut lace, recycled cardboard and a little charm together with a tag quote using a Tim Holtz stamp..  I've always found working on the small ATC size quite restrictive and although these are only slightly larger, somehow I found it a nicer size to work with and I'm looking forward to receiving a couple of swaps in due course. 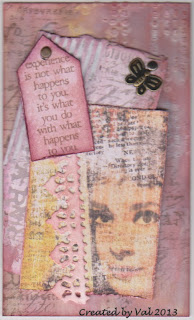 It is the fourth and final week of this month's sketch challenge at House of Cards and the style this time is vintage/shabby.  Now I know it is fine to change the orientation of a sketch from vertical to horizontal but I've gone way 'off piste' today and put mine on the skew so I hope that is also acceptable.  Background is a piece of Tim Holtz Kraft Resist card, sponged with Distress ink - I  added some cut and embossed cogs with the addition of a little ink and Treasure gold.  The postcard was made using a stamp from Chocolate Baroque on a scrap of watercolour paper.  The penny farthing was cut with a Memory Box die and popped onto a Sizzix (Stampin' Up) die shape.  The tattered banner was from a Tim Holtz Sizzix strip die and two little metal charms were added to comply with details the sketch layout.  I wonder what HOC will come up with for the September theme - always interesting to see how others interpret these suggestions. 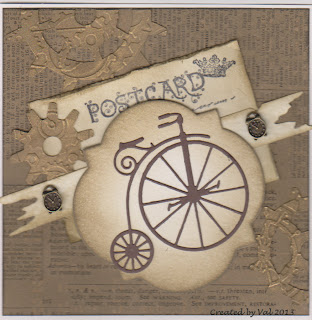 A Bit of Mixed Media

I've had this box lying around for quite a while with the intentions of decorating it in some way - it started off as a plain kraft coloured box of about 7" square.  My first move was to cover it all with a layer of gesso, followed by Distress paint in Weathered Wood with a final light touch of Rusty Hinge.  There were a few things I wanted to try on this and one of them was the faux aged metal effect which I spotted on Jenny's blog recently where she had used it to good effect on a pocket watch.  As I have this die I thought I'd use it too - the face of the watch was printed from the Wellington CD which I used recently (Docrafts).  The image was resized  to fit the die, sponged with some Distress Ink and then covered with rock candy crackle medium, hands were from a Marianne die which luckily was the right size. I started the background by sponging distress inks and overstamping with various text and images.  The area over the text in the top left has been textured through a diamond mask with glass bead texture medium which dries clear to show what is behind it - unfortunately because it is clear it hasn't shown up well on the photos although I'm pleased with the effect on the actual box.!!  The grungeboard swirl was coloured with rusty hinge and clear embossed.

It so happens that Make My Monday this week are asking for 'anything but a card' so this will be my entry for their challenge and also it fits the metallic theme on Sunday Stamper where hopefully faux metal will be acceptable. 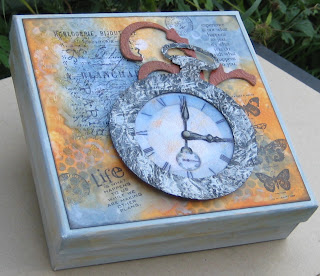 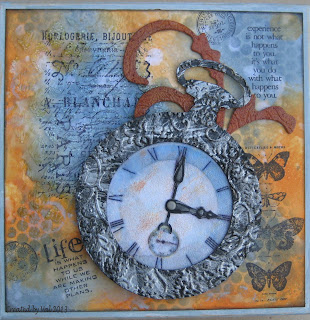 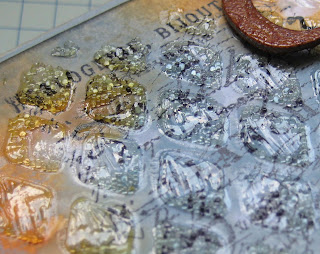