No, I'm not moving - reckon I have far too much 'stuff' for that to be straightforward!!  I was sorting out my box of cards and realised there were a few gaps which needed filling so for now I'm concentrating on those categories rather than making loads of birthday cards.  This new Home card gave me an opportunity to make use of a die and stamp set which came free with a recent magazine.  Since we lost the bus service which  I used regularly I don't get to the larger newsagent so often which means I miss out on the temptation to pick up magazines with freebies but I'm pleased I didn't miss this one.  The house was cut using the die supplied and then I drew lightly in pencil through the windows onto a scrap of cream card so that I could then use some of the stamps to add curtains and blinds to make the house appear lived in.  The railings behind the house, the little cat sitting on the grass and of course the sentiment were all included, along with others, in the stamp set.  The tree was cut using another die which I've had for a while and wasn't part of the set although there is a tree stamp which could be used another time. 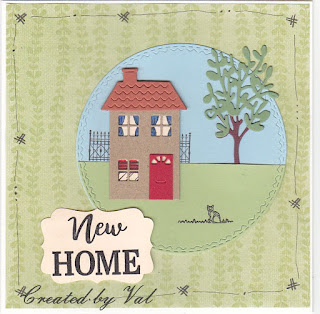