I'm afraid I was tempted by a set of quirky cat stamps offered as a free gift with a recent magazine and there was also a selection of  reasonable quality papers inside as well.  I've used just one of the cat stamps and one of the sentiments to make this brightly coloured birthday card.  The image and words were stamped onto a die cut shape (using the Misti really helped here) and the cat was coloured using watercolour pens.  All that remained was to choose three of the papers and use them to complete the card along with a banner made using a scrap of black card and three card  candi dots. There are more cat images and words which can be combined to make cards for several occasions. 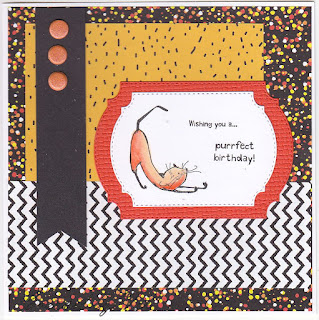 Image - from a set of stamps given free with Making Cards magazine
Papers - also free with the magazine
Banner - strip of card with pointed end punched (Stampin' up punch)
Die cut shapes - set of dies from The Works
Embellishment - card candi from Craftwork Cards
Colouring - watercolour brush pens
Posted by Aquarius at 08:50 4 comments:

I don't think I dare admit to how long ago I spotted this matching stamp and die set on a blog and felt I must have it, I do know it was a long, long time ago and to my shame this is the first time it has been used.  Most of you will know how dangerous it can be reading blogs and seeing items which  other people are using - items which really should come and live with me as well!!  I am trying to curb my enthusiasm somewhat because I've accumulated so much 'stuff' over the years but we've all been there haven't we??

Anyway I thought I'd make an Anniversary card with these dinky elephants using the words which came along with the stamps.  Doing this I'd say has made an 'our' anniversary card rather than a 'your' one but I'm sure someone will spot it in my box and decide it is just for them.  The elephants were die cut and stamped before popping them onto a die cut stitched label and stamping the words; finally adding a punched heart and a banner underneath with a sentiment.  I did a few spare elephants while I was cutting and stamping and I'm sure they will appear sometime on a different card - I don't think I've ever knowingly made exactly the same card twice; not into batch production! 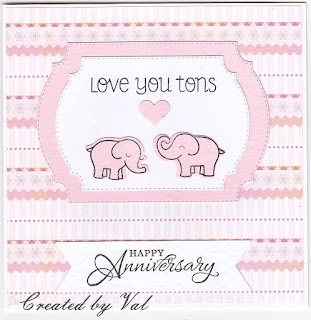 I was just visiting a few blogs before writing this post and spotted that there is a House Mouse Challenge blog  which I'd not seen before so I decided to pop along there because their theme is 'anything goes'.  I came across this stamped and coloured image whilst having a bit of a tidy up - not quite sure why it was never used at the time.  Anyway I also had a few bits and pieces of matching papers around so thought it deserved to be made into a card.  The colouring was done with pencils. 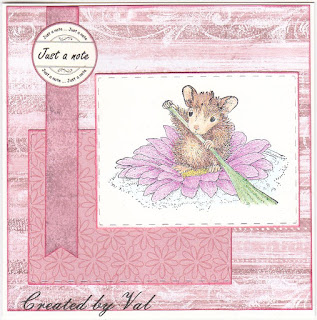 It is that time again when we sneak into the Playground with our cards to be in with a chance of maybe winning the featured prize and there is the usual inspiration from the lovely Di.  For  my offering this week I've used up a few of my white snippets, starting with a reasonable sized one which has been coloured using a mix of Pixie Powders and Distress Oxide inks splattered around followed by a bit of detail using a stencil.  I then die cut a selection of flowers in white and found a few scraps of  toning green for the centres and leaves.  The sentiment was stamped using the Misti of course to position it nicely.  I found another larger snippet  in darker green and popped the inky panel onto it before adding to a 6" square white card. 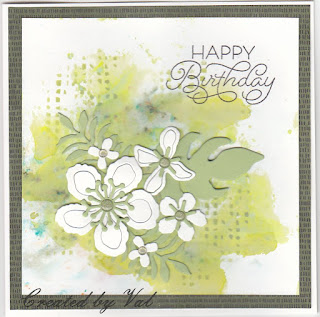 Sentiment - from a set given away free with a magazine
Flowers and leaves - Stampin' Up Botanical Builder Framelits dies
Posted by Aquarius at 10:40 8 comments: