While I still had the jar stamp and die sets on my desk I printed off a few more penguin images from the download and coloured them with pencils.  The penguins were resized so that once coloured I could stamp the jar around them before die cutting the shape.  The sentiment was stamped onto white card and cut out with banner dies and some seasonal paper was used to make up the card.  A few silver snowflakes were punched and added for extra interest. 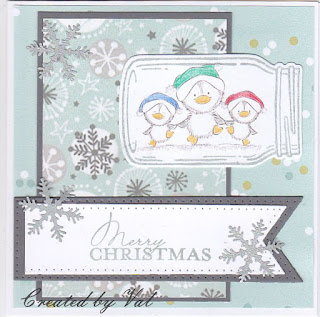 Penguins in the Snow

The clever Jules regularly features in Quick Cards Made Easy magazine and this time around she has featured Christmas cards with some really cute penguin digital stamps.  I just couldn't resist CASEing one of her cards - not exactly the same as hers but fairly close.  If you visit her blog you will see that she also shows a card with foiling which was another article in the magazine.

I printed some snowy background paper and also resized some of the penguin images to fit with the size of the stamped jar - I'm not sure it would have occurred to me to use this set of stamps for Christmas but having seen the article there are lots of possibilities and I will probably try a few more while the stamps are on my desk.  The penguins were coloured with pencils and cut out with scissors as were the trees (also a digital stamp), the jar was die cut.  The snowy ground was a torn piece of card to which I've added some glitter.  A stamped banner sentiment and with some time spent assembling the components I have another card for the Christmas collection.  I'm actually fairly well stocked with seasonal cards for a change - usually they are a last minute job!!  Back to playing with the jar stamp set now and of course some more cute penguins.

I can't believe it almost a week since I last posted on my blog - the weeks just seems to have flown by with not too much achieved on my part.  however I have come up with a card  for the Playground challenge using some snippets.  I recently saw some dies demonstrated on TV which were specially for DL size cards and was so nearly tempted, mainly because I have quite a lot of that size cards which need using up but common sense prevailed and I decided it would be a bit extravagant buying four sets of dies at some expense just for the sake of using up card stock (getting sensible in my old age!!).  I looked through my extensive range of dies and found some which could with a bit of imagination be used to fit nicely, then dug out some of my slightly larger snippets of brown and cream card and set to work.  This design required quite a bit of die cutting and layering but I was quite pleased with the result and of course I've managed to use up quite a few of my snippets in the making.  The main die and the backing layer were each cut three times and then a smaller die from the same set was added with a computer sentiment.  Some of the smaller snippets were used to cut a couple of flowers.

There is a lovely Christmas card on the Playground blog for inspiration and as usual the die and stamps used are being offered as a prize.  Di always gives us detailed descriptions of how she sets about making her cards along with useful tips and warnings if there are any pitfalls to be avoided.