Despite knowing that I really didn't need anything else to make Christmas cards I was tempted when I spotted cards made by my friend Anne using a matching stamp and die set - a snow globe with three little scenes to stamp.  The images were stamped onto white stamping card (Misti came in very handy here to line them up) and then coloured with Copic pens.  Having die cut the globes I then had to decide how to compose a card to use one of them so I found a piece of background paper which I'd printed recently and some scraps of blue and kraft card to cut the circles.  Greeting was die cut from a small scrap of the left over white card and also some small snowflakes were punched.  I felt it just needed a little something else so scrabbled in my box of random die cuts where  luckily I found some greenery and fir cones.

I have three more globes ready prepared to make more cards so it is thinking cap on - miserable day today and getting a bit dark to do much more now.  I reckon I should make a warming cuppa and sit down for a 'think'!!!!  Some people sits and thinks but some just sits - I will try to do the former. 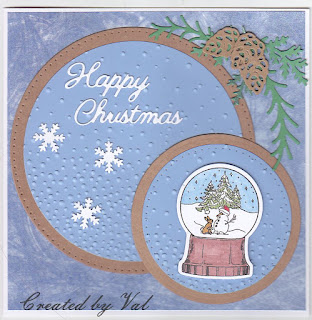 I'm still ploughing on with Christmas cards and I must make sure I keep up to date with the inserts and envelopes as well because this isn't one of my favourite jobs and I hate it when there is a huge pile to do.  I die cut this penguin family and assembled them all which does take a bit of time and involves a bit of snipping with scissors to add the feet, hats etc but worth it I feel.  The background paper was printed from a CD and I then die cut some 'snow' for them to stand on,  Sentiment was stamped using the Misti which is so handy for good placement. 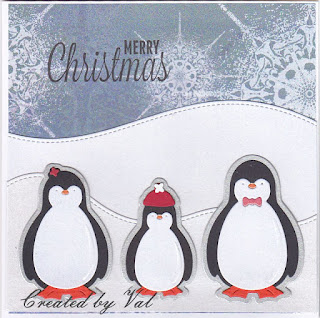 The die used here is quite large and it has a stamp set to go with it not much else is needed to make a card.  I cut the word from Centura pearl card and the rectangular layer from a dark red pearl card.  The little sentence was stamped onto some matching white card before cutting out a banner shape.  I simply added a die cut snowflake and backed everything with a piece of snowflake design paper which I printed from a CD which I've had for many years.  My collection of Christmas cards is growing which has to be good. 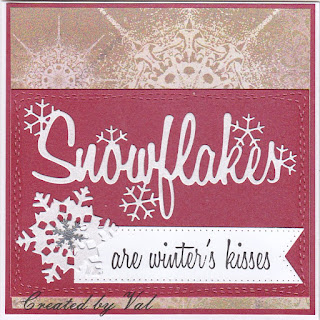