Again I've treated  myself to a 'class in the post' from Stacey Marsh and this time we have been supplied with some Ice Cream design DSP to make up the cards.  I had some cornets left over so have now made a tall card adapting one of the new rectangle sketch designs from Jules who has kindly opened up a new section on her blog for rectangular card ideas to add to her extensive library of square ones.  My DL design for this card is loosely based on one of these new sketches so thanks, Jules.

The background I've used is from the Icecream papers and I've added a die cut border strip down the centre, topped with a stencilled and inked rectangle with cornets, fussy cut from the DSP,  arranged down the side.  A greeting is added below with another spare cornet and that's yet another birthday card for the box.

There were a couple of die cut and coloured birds loitering amongst the 'stuff' on my desk so I set about using up more of my snippets of white card to die cut some branches for them to sit on.  Had to dig out the extra long cutting plates for this die which is a long narrow strip with foam backing - ancient but still works well. Branches and leaves were coloured using alcohol pens.  I also had some small stamped, fussy cut flowers which I needed to use up so they were added as the blossom.  After considering the elements I decided to assemble them onto a DL card, adding a simple greeting. 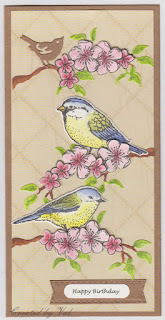 No it's not me thinking of a new home - not sure I could face packing up and moving all my crafty stash 😀😀..  I have made a 'New Home' card though using a wood-mounted stamp set which I've had for some years.  Re-visiting crafty items which haven't seen the light of day for ages can be quite an interesting exercise and it is ALMOST as good as having something new to spur the mojo into action.  Naturally being an old stamp set there were no dies to match and not even a punch, or if there was I didn't purchase it so all the little pieces were stamped, fussy cut and assembled into a little scene.  Started with a cream oval die cut and used a freebie texture stamp to make some 'ground' and a little touch of grass before popping the houses and trees in place.  Raided the scrap boxes for some other pieces of card and that's it - a New Home card made.

I hope you all remembered to put the clocks forward - it will be nice to have  more daylight each afternoon/evening now all we need is some warmer temperatures. 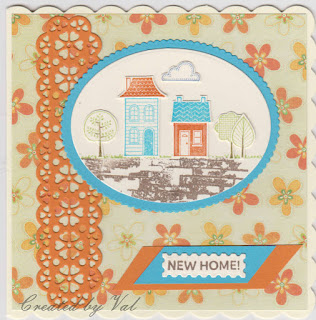