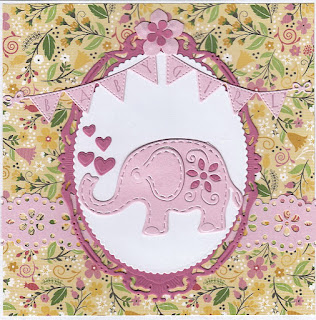 Here is another of the male birthday cards which I need for this month - fairly quick and simple once I'd decided on an image to use.  Image was printed using Craft Artist, then die cut using an oval die with a larger oval layer behind.  I found some designer paper which picked out some of the colours within the picture and simply added a banner with a printed birthday message. 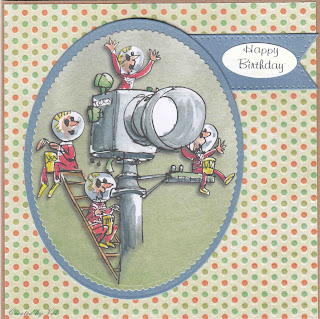 I need three male birthday cards this month for various family members and I'm taking this one along to the Playground because except for the base card it is made using snippets.  I started with a fairly large snippet of 'wood' paper for the background and cut a circle from a smaller piece in a toning colour.  This circle was backed with a a slightly bigger kraft circle.  The penny farthing was die cut from a scrap of black and I'd found a piece of card which had been coloured with inks and embossed - this has been lying around for ages just waiting for the right card.  The words were popped onto a die cut label in matching kraft card and then I decided that in keeping with the male theme it might be a good idea to use a 6" kraft card for the base.  I'd like to have used up more of my smaller snippets but I'm still struggling with  blurred vision until such time as I can have my second cataract surgery but at least I have a date now even if it is some six weeks away; followed of course by the recovery time.  I must apologise for maybe not commenting on some of your blogs as frequently as I should although I do try to visit and at least look at the pictures - reading the text on screen is a bit of a challenge as are many of the crafty things I like to do.😩 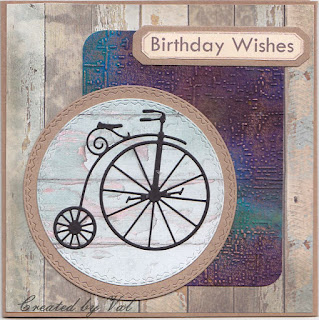