The theme this week for Make My Monday is ELEGANT LADIES and I've used an Art Deco image to make my card. The image is from a Card Creations CD, as is the backing paper and the border.  The embossed panel was made with a Papermania embossing folder and the sentiment is a Papermania stamp. 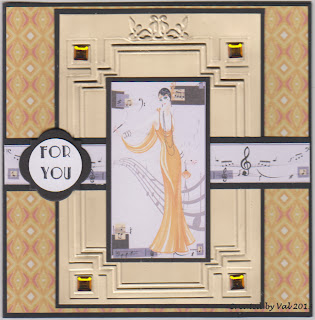 I've been stitching this morning making a bag using a Clover template - these are excellent templates with very clear and concise instructions for six different bags of similar style.  One of the members of our craft group had very kindly brought along some pieces of what I imagine are samples of up-market furnishing fabrics to share and this one with the 3-d embroidered rosebuds appealed to me.  I also had a plainer piece of linen type fabric for the lining and handles.  This piece had rows of vintage ruched ribbon which of course I removed and saved to be used on a card or three!!  Because the fabrics were quite heavy I could only make a fairly plain style of bag but I will enjoy using it and I'm sure it will be a useful addition to my collection of bags - love them - and they do all get used at some time depending on how much shopping I need to carry.  Sorry it isn't the best of photographs but I'm sure you get the idea. 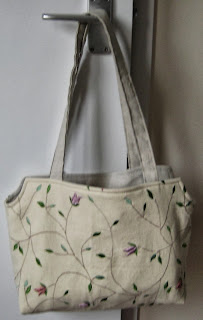 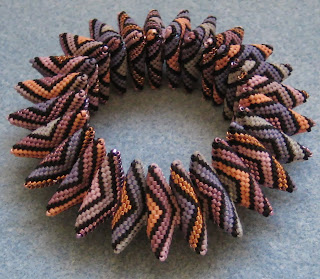