My card for Judith's Forgotten Friday challenge this week uses a stamp which I was reminded of when I saw someone on another blog had used it recently.  It is a flower one by Penny Black so I dug it out from the depths,  stamped with Versamark and embossed with detail white powder, then the image was brushed and sponged with Distress Inks. Background paper is from the essence of Nature CD (Chocolate Baroque) and I added some layers of punched card using a Martha Stewart border punch.  The sentiment was produced while I was playing around trying to make some circular wording using  a drawing programme on the computer. Judith is being very generous this week and offering a prize of some crafting goodies to a lucky winner when the draw takes place in a week's time. 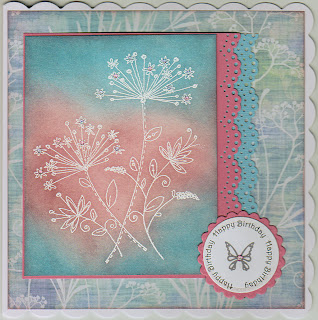 The wording on this card was produced on the computer and cut out with a Nestability label which was sponged and overstamped using a stamp which matches the background paper (Essence of Nature from Chocolate Baroque).  Flowers and swirls were cut with Marianne dies. A strip of embossed card - Cuttlebug embossing folder - and a die cut butterfly complete this card. 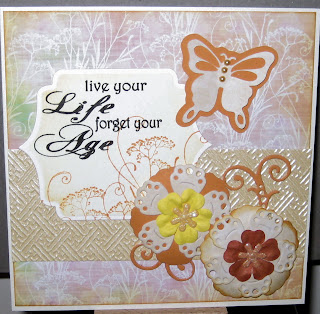 Another of my ideas for using the Fantasy Meadow stamp, this time in monochrome.  It was stamped with Versamark and embossed with white detail powder, then Distress inks in Pumice Stone and Black Soot were sponged over, giving it a final buff with kitchen paper to clean up the white lines.  Background paper is from the neutrals section of Essence of Nature. (all from Chocolate Baroque). I reckon now I should maybe use some of the other stamps in this great set.

I'm late coming onto the computer today - firstly I had to do a bit of food shopping as supplies were dwindling and when I got back I recluctantly mowed my large front lawn.  Why reluctantly?  It was badly in need of a cut but looked like an untreated summer meadow - a mass of flowers and feathery grasses - really pretty but not really suited to the front of a semi!!  The flowers were the usual mix of daisies, clover, buttercups and so on with the addition of some very tall yellow flowers related to the dandelion I would say and I think the common name is hawkbit. Alongside them were a lot of similar flowers in a deep orange but with clusters of smaller flower heads.  I imagine these last had escaped from cultivation although no-one around here seems to have any of them apart from me (and not in the flower beds).

Here is another card from my experimentation with the stamp from the Chocolate Baroque Fantasy Meadow set, this time using a Tim Holtz technique with paint dabbers and clear embossing resist on black card. This technique is explained in his 12 Tags of Christmas 2007 day 10, the final touch was to add a little Distress stickles and spread it thinly with a finger.  The background was sponged with Distress inks and overstamped with other stamps from the set - the sentiment is from Artistic Affirmations (also Chocolate Baroque). 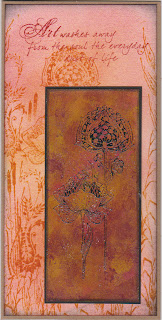 The challenge at Bah Humbug this week is 'surprise, surprise' - we could either surprise them with a design of our own choice or produce something with a hidden surprise.  While I was thinking this over and trying to decide what to do I remembered that when my friend Anne  and I met up for a coffee earlier this year she showed me something which she had made last Christmas and I thought this would be just the thing.  At the time I found the image for the face online somewhere but afraid I can't remember where.  I worked out the measurements for the wrapper by measuring the bar of chocolate - yes the surprise is a sweet treat inside this snowman.  At least there was a bar inside when I took the picture Lol!!  I then made the image the right size to fit using My Craft Studio and just glued the wrapper around the bar.  The little hat was made from a scrap of fleece fabric which I just happened to have around (I managed to find it too which is a surprise in itself!!).  I hope you like it and it was a change from making cards.