I realise that it is a week since my last post which is unusual but I have been trying to play catch up with some beading which doesn't produce such speedy results as making cards.  I spotted this necklace in an issue of Bead magazine before Christmas and decided I really had to make it. It was certainly very labour intensive and I still have a beaded clasp to make but thought I'd better post a picture of something before anyone thought I'd left the planet!!  As well as getting on with this I've produced an intricate bracelet from a somewhat complicated pattern which I was given by a friend - this is also awaiting a fastening and I will take a photograph of that when it is completed. 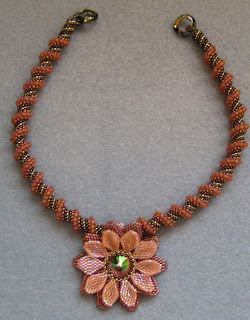