For this second challenge the team on Addicted to Stamps have given us a bingo card as an aid to making a project - the idea being to choose any three items in a line and you will see they've been kind and given us a 'free' choice in the middle. 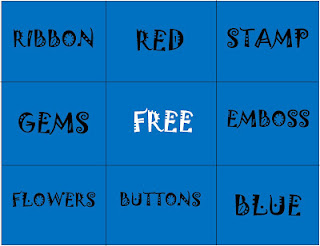 I opted for the flowers, free (I used scoring) and stamps line and have 'CASED' a card from Jenny's blog and also made a matching gift box for a birthday which is next month although not sure at the moment what the gift will be but will need to fit into the box!! I chose a different colour combination for my items (Perfect Plum, Pale Plum and Cream) and changed the design of the card somewhat using Nature Garden paper from Prima overstamped to add interest and this paper was also used on the box.   The stamps are from Stampin' Up Everything Eleanor set and there was quite a bit of cutting out of shapes and flowers, the sentiment was produced on the computer and punched using SU punches. Matching paper was added to the box and the rosette was made using their new Scoring Board with the diagonal board being used to add scored lines to the cream layer. This board is brilliant, especially with the diagonal insert and the lines are in 1/8th inch incremennts which are so useful.  Since taking the photograph of the box  I've added pearls to the centre of the flowers (the card was scanned which has made the colours look different but the two items do match). 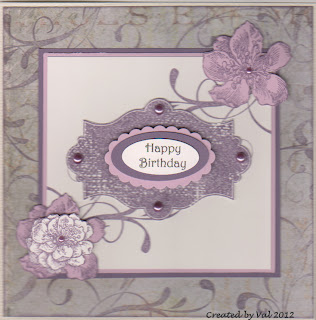 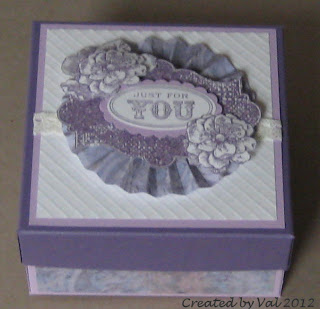 Do check out the two links to see which bingo lines the DT chose for their cards and to see lots of great Stampin' Up ideas and classes on Jenny's blog.

N is for Numerals

When it came to the third letter of my alphatags for this month I was stumped for a while but evetually came up with the idea of using numbers in some way and this is what evolved.  The tag itself was cut from Tim Holtz kraft resist and Distress inks used to bring out the design. The torn bingo card was a TH embossing folder, again sponged to show up the numbers; rosettes were cut using a Sizzix die, having first stamped numerals onto the kraft card using an Elusive Images stamp from the ATC set (now Chocolate Baroque), the leaves were a Crealies die also cut from the kraft resist card.  Now it is time to get the brain working for the next two letters. 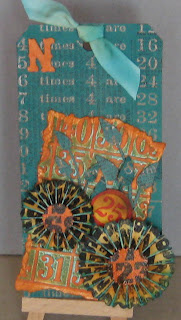 Over at Make my Monday we are on the last week of the 'June Events' themes and this time it is based around Wimbledon, strawberries and cream or associated colours of red. cream and green so a very wide choice.  I remembered I had this very nice Penny Black stamp with a cat enjoying a cream tea and strawberries with a couple of mouse friends so it was an obvious one to use.  Backing paper is from Papermania with a doodled line drawn to define the edges; image was coloured with Polychromos pencils and cut out using Nestabilities; a sentiment from a collection by Cuddly Buddly and a scrap of embossed green card (still using up bits). 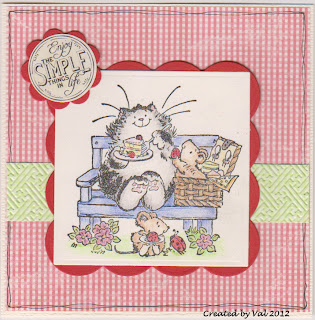 The challenge this week on Simply Stampin' is another colour combination and the only one I had was the bashful blue so I've substituted another SU green and soft suede - the white was easy of course.

Backing paper is from Funky Hand and is a piece left over from a recent project and luckily it seems to be a good colour to go with the challenge ones.   I used some scraps to stamp and punch a bird on a branch and some little flowers, cut a Top Note in soft suede and used a Nestability die to cut a bashful blue layer which was embossed using a Crafts Too folder.  The bird and leaves were popped onto a white oval.  The sentiment was built up from various stamped and punched shapes (all SU) and I just had to use a piece of the gorgeous pleated ribbon and a few pearls. 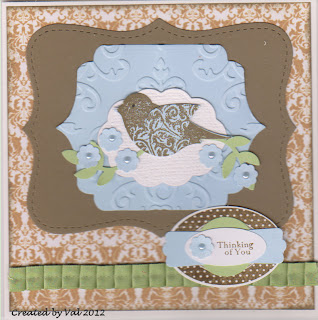 If you follow the link it will take you to the blog to see what the Design Team have made this week.
Posted by Aquarius at 09:11 11 comments:

This morning started out very grey and quite windy although thankfully dry for the time being but certainly not the sort of day for going out and about so I opted for getting inky fingers.  When I saw the theme for the Sunday Stamper challenge this week which is 'You Gotta Pick a Pocket or Two' I was immediately reminded of a wooden backed stamp made by Rubbadubbadoo which I've had for many years and can't even remember when it was last used. After a short search I managed to unearth it and I've stamped it three times so that I could cut out the pocket details and add some tickets which are Creative Expressions stamps.  The background is a piece of Tim Holtz  Kraft Resist paper overstamped with a selection of Paper Artsy stamps which came free with a subscription to Craft Stamper - again a few years ago. Do go and take a look at the great project by Hels which has many more pockets and lots of interest.  I have a couple of male birthdays coming up next month and I think this will fit the bill for one of them. 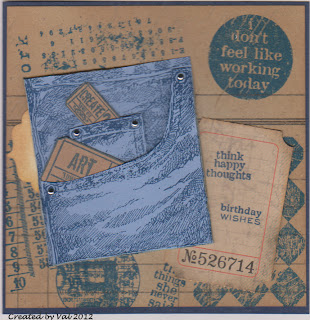