I've used up some snippets of fabric today to take along to the latest Playground challenge - the three fabrics were all left over from separate projects and some of them were in odd bits and pieces but luckily they toned together nicely to make this bag.   I bought the pattern last week at the quilt show and decided to try making the plainer version to give the pattern a try out before going for the more complicated version which has applique houses on the front pocket and a pieced panel for the zipped pocket on the back.  Both versions are quite heavily quilted although I've actually not done quite as much as was suggested in the instructions.  I found the instructions to be quite clear to understand but the construction method seemed a bit more complicated than I was expecting but I got there in the end although it did take me much longer to make than usual.  All the while that I was stitching my mind was working out how it could be made using a much simpler method of assembly and I will probably play around a bit and then try adding the applique.

The pink panel on the front is a quilted and bound pocket and on the back there is another picket which incorporates a zip, the flap is fastened with a 'lucky find' button of the right colour after a little root through my box of odd buttons. 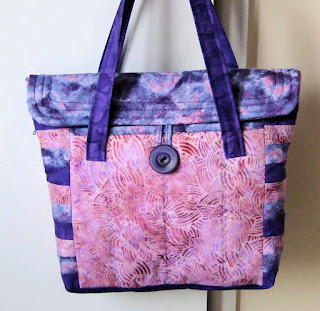 Bag Pattern - from Monkey Buttons - lots of lovely patterns and fabrics available from them
Posted by Aquarius at 15:11 3 comments: