I've been trying to hone my skills with a bit of parchment grid work lace with white work and I'd forgotten just how long this takes.  My original intention was to have a much wider lace section around this card but settled on less laciness (not sure that's a word) when I realised how much time it was taking.  The result is far from perfect and doesn't bear close inspection  - I'm not sure how people get them identical.  For anyone who doesn't know, each little cross is cut out with scissors after piercing four little holes - quite therapeutic but requires some patience and reasonable eyesight.

Apologies for yet another parchment card but rest assured I've not abandoned any of my other crafty techniques. 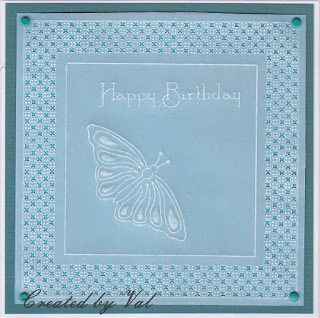 I think there is still time for another entry into the butterfly challenge which this time is 'You Choose and/or Wedgewood Blue'.  I've chosen this time to make another parchment card - loving the Groovi system and particularly the way you can select elements from various 'plates' and combine them into an entirely different composition.  The only problem as I see it is that I might NEED a few more plates ... LOL.  Parchment really speaks for itself and I won't go into descriptions of how this was achieved and apart from the parchment, backing card and some brads there is no list of items used.  I apologise for putting up another parchment card but I need plenty of practise to get back into it.  I've incorporated a bit of white work as well as some colouring 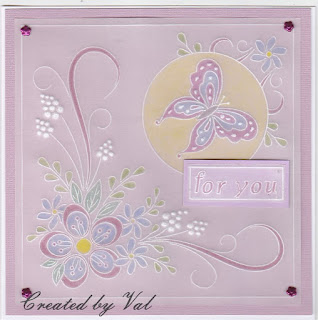 Various plates from the Clarity Groovi system were used
Polychromos pencils for colouring
Posted by Aquarius at 11:21 10 comments:

I was happy to be asked again to fill the Guest Designer spot over in the Playground and this is what I came up with.

Searching through some seriously old stash to find a snowman die which I'd remembered I had years ago when die cutting was in its infancy I came across this cute teddy die which I'd completely forgotten I had so decided to make a card for the Snippets Challenge.  Apart from the base card the whole thing is made up from odd pieces of card left from other projects.

I started by cutting out the bear and all its 'extras' twice so that I could have a Mr and Mrs.  As this die was an early type with all the cutting parts on a single square of metal backed with a layer of foam it wasn't entirely straightforward to cut the different coloured pieces.  Once I'd gathered them all together I made up the two bears which were then layered onto a framed circle.  A decorative strip has been popped behind the circle and two die cut hearts added.  These hearts were cut twice, one gold and one cream before popping the opposite colours back into the spaces - I drew around the 'waste' of the hearts to cut out  a slightly smaller backing layer with scissors.  A simple sentiment stamped onto a banner was the finishing touch.  Backing paper was a larger snippet tucked away in the back of a paper pad. 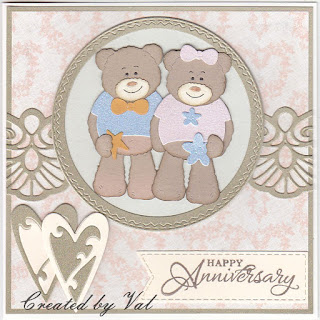