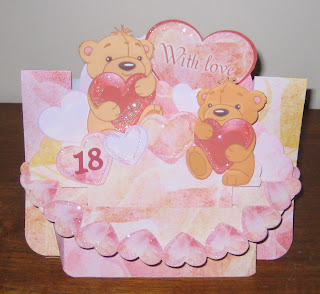 Very best wishes to everyone for a happy, peaceful and healthy New Year.

My first card for 2011 is a shelf card made using My Craft Studio Klever Konstruction CDs - actually it was started last year but completed this morning once the glitter and glue had dried. There are some really pretty designes on the discs and it was difficult to select which one to make first;  I also found it a bit on the fiddly side and it doesn't stand quite as well as I thought but I would print  out onto heavier card another time which I'm sure would solve that little problem.  I'm suffering crafting withdrawl symptoms due to the cold weather and the normal festive season 'stuff' but hopefully now the temperature has gone up to more normal winter levels I should soon get back into the swing of things (after some long overdue tidying up of my workspace).  I don't really 'do' resolutions but if I did it would have to be to put everything away as I go along and possibly not to hoard so many bits and pieces of card and paper which I can't bear to throw away.
Posted by Aquarius at 10:08 4 comments: