I wanted to make a card for my grandson which was a bit quirky and not the usual 'run of the mill' things produced for males so I had a little trawl amongst some of the miscellaneous files saved on my computer - many from some years ago and it was a good exercise in reminding me just what I do have stored away and pretty much forgotten!!  I eventually settled on this dog image which I printed and then cut out using some wonky squares dies which haven't been used for ages but I thought they were just right for this card.  I finally added a random strip of text paper, a greeting and the number along with a patterned background paper trimmed to suit and which was the last remaining piece from a pad.  He has a gorgeous Golden Retriever which is much more beautiful that this zany pup but I hope he will like my choice of image!

Everything apart from the base card can easily be classed as a snippet so this card will be taken along to the Playground for their latest challenge before I pop it into the post. 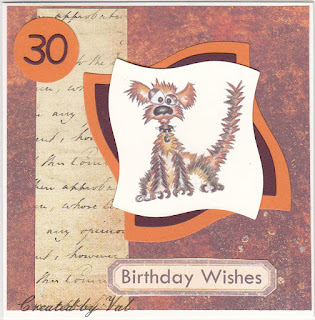