I promised you another card using the stitched shapes and this time I used ovals stamped with the same flowers.  A diagonal border has been added along with a birthday greeting - not much more to say about this card really except that I've used the same colours because they were the bits and pieces of card still lying around on my desk.  It is a really miserable and wet day here today so I guess a bit of crafty therapy is called for. 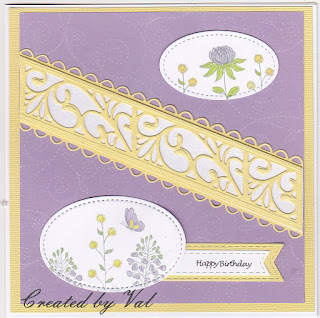 I can hardly believe I've not posted on my blog since the beginning of the month and here we are almost at the end!  I've not exactly been idle and in fact have made some cards but as they were special ones I wasn't able to show them in case they were 'spotted'.  I've also been doing some sewing which is still ongoing but today I've actually managed to make a card using up some of my many snippets so that I can pay a fortnightly visit to the Playground HERE.  I stamped the flowers onto scraps of white card and cut them out with circular dies - also did some oval ones which should appear on another card in the near future..  They were coloured using alcohol pens.  I then sorted out some mauve. white and yellow snippets to die cut a fancy square and a double ended banner and embossed a leafy pattern onto the mauve layer.  For the moment I've decided against adding a sentiment to this card because sometimes people like a plain card so that they can write their own message inside or even use it as a pretty notelet to send. 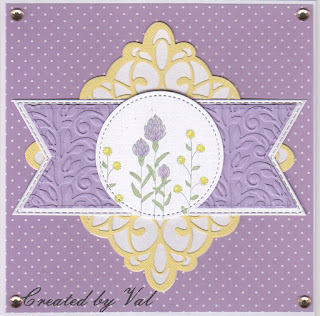