The card I've made for the Forgotten Friday challenge this week uses a 'forgotten technique'.  I was reminded of this earlier in the week when I got together with three other crafty friends and one of them  (thanks Janet) told us about a way of using cling film with the lovely images which often appear on serviettes.  This is instead of using mod podge which is how I've done it before and as well as taking ages to dry it has a strange smell and can be messy.  Unfortunately I haven't been able to get the right brand of cling film yet so I resorted to using a piece of Bondaweb instead which also works but would work out more expensive than using cling film.  Background paper is from Papermania and I added some black lace and a scrunched flower made from brown wrapping paper, sprayed with Glimmer Mist.  Greeting was composed on the computer, cut out using Stampin Up punches and the leaves were cut using a Marianne die.  Judith had made a flower using brown paper - thanks - I'd not have thought of that but it is effective. 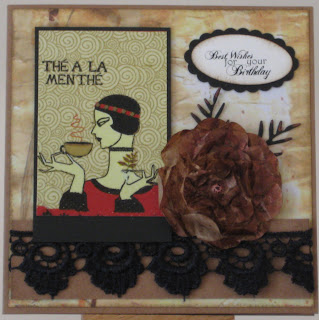 Something for a Change

I've not made a single card since the weekend which is most unusual for me but I've not been idle.  As well as having a little 'teach in' with three crafting friends yesterday making beaded beads, I've also managed to make a fabric covered box just the right size to hold a box of After Eight mints which is a nice way of presenting a little gift to a chocoholic and they will always have an excuse to buy more when they've eaten the ones you've given them!! Naturally the box could be used to keep anything if you don't happen to like mints. 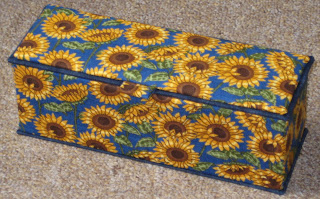 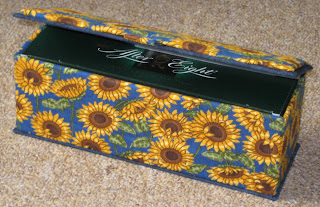 The challenge this week on Less is More is a 'recipe' to use three squares so maybe not quite so daunting. I have chosen to use  papers and a stamp from Papermania Pampered Pets collection.  The faux postage is from Forever Friends Good Life and the sentiment is a free stamp given on the cover of the current Creativity magazine.  What can I say - the dog was stamped  onto plain card using Distress ink and brushed out with a water brush; the squares were all cut using Nestabilities, sponged around the edges and arranged tastefully (I hope!!) onto a plain white card. - there is still some white space but not as much as last week. 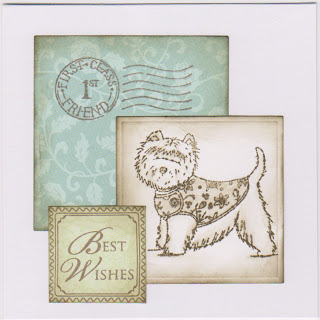 Well we are up to week 8 already at Bah Humbug and this week's challenge is 'things that fly' which should give everyone lots of scope.  I decided to go for robins but if these two little fellows eat the pudding they are eyeing up I think they might have problems getting off the ground. The background paper, robins, pudding, holly and sentiment strip were all printed from Polkadoodles Sundae of Seasons - cut out, glittered and popped onto a couple of Sizzix die cut shapes.