A bit of paper piecing on this card.  The image was stamped onto some cream card and then again onto oddments of patterned paper.  Parts of the image were cut out using scissors before piecing them into place over the original stamping - smaller details were coloured with pencils.  Kraft card was used to cut a scalloped circle and some corners and a computer sentiment added. 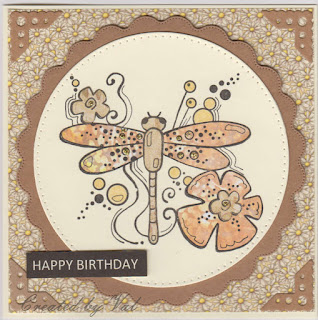 Despite being more or less 'confined to barracks' the weeks still seem to go by quickly and it is time for another challenge over at Pixie's Playground.  As usual there is a super prize on offer which this time the lovely Di has used on a doggy birthday card for their gorgeous Dudley who is two years old.

For my card I've used some snippets in black, yellow and white to stamp and die cut various bits and pieces and the largest snippet is from some papers which came free with a magazine a while ago and this is what inspired the rest of the card.  A stencil was used on a snippet of white card to make the border on the black banner.  There are some small gold mirri hexagons inserted randomly into the honeycomb but they don't seem to show up in the picture.  The wings of the bees were brushed a couple of times with clear Wink of Stella and sadly that doesn't show in the picture either. 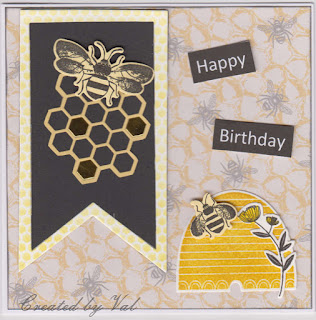