There is always a silver lining - having to stay in because of the snow meant I could make some cards yesterday and here are some more quirky houses from Polkadoodle.  I've also managed to incorporate some more of my 'leftovers' to put this card together which has to be a bonus. The Top Note die cut shape has been embossed and the image layered over the top, sentiment produced by computer and layered using three punches from Stampin' Up; die cut corners from more matching scraps of card. 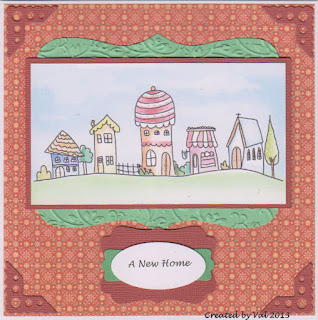 When sorting out my stock of cards I realised there were no 'new home' ones left so as it was decided to cancel our usual Friday craft day I thought I'd do something about that.  You may have guessed that the weather caused this cancellation as we had a fall of snow overnight and it was still coming down steadily earlier this morning although for now it has stopped and everything is very wet and drippy outside.

For this card I used an image from Polkadoodles Sugar Plum Daisy CD with matching backing paper. There are usually some great quirky houses on their CDs which are bright and cheerful.  The sentiment was produced on the computer and a Marianne die used to cut out the decorative circle. I've made a couple more New Home cards too and now I'm aiming to make a few  'get well' ones as they are always handy to have, especially this time of the year. 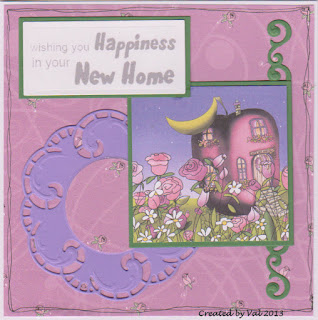 Bright Card for a Dull Day

This is a card made using bits and pieces left over from other projects.  The papers were printed from Funky Hand CDs; the stamp was from Stampin' Up  Apothecary Art set, cut out with a SU Sizzix die and the message was made on the computer and punched out. 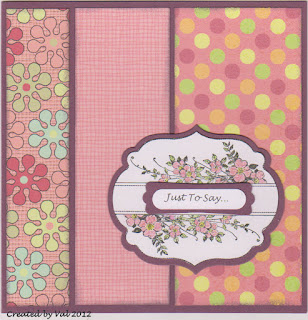 The challenge this week on Make My Monday is to make something using dies and/or punches and for this card I've incorporated both.  I'm still aiming to use up some of my scraps and also trying to resist buying any new 'stash' and use what I already have although I'm not sure how long this particular aim will last!  Background paper is from my precious hoard of beautiful designs received as part of the ex Graphicus Guild membership (now known as Chocolate Baroque).  The various punched and die cut elements were made using scraps and I even couldn't resist using some of the tiny flowers which were 'waste' from the punched border (Tonic punch). The cameo is a very old Quick Kutz die, popped onto a punched oval (SU) and an embossed oval (Sizzix for SU).  The swirl and butterflies are Marianne dies.  The greeting was produced on the computer and put onto three punched shapes (SU).  Do take a look at the inspiration from the Design Team by following the link above. 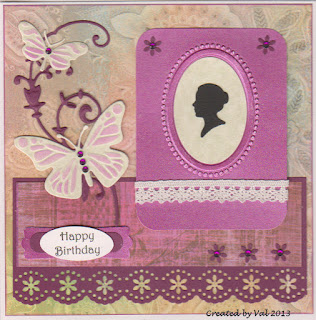 This is the second of my 'quintiles' for the swap at Chocolate Baroque using the winter wonderland theme.  So far there isn''t a similar scene outside my window although there has been snow in some parts I know - hope it isn't causing anyone too much disruption. Again I've used a background printed from Seasons Greetings CD, then stamped one of the houses from Chocolate Baroque (coloured with Distress inks), cut out with a Nestabilities die, added a piece of Cuttlebug embossed card and stamped words.  Makes me feel quite chilly looking at this - roll on Spring I say!! 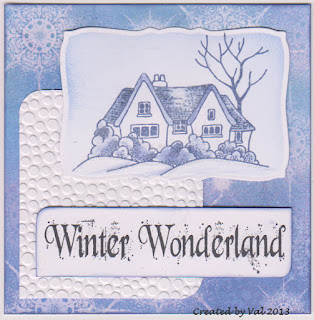 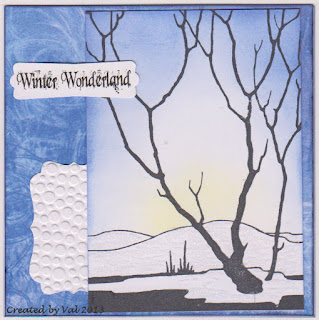