Another Break in Transmission!!

I'm afraid the blog is still taking rather a back seat at present as is my card making, mainly because I've been doing quite a lot of sewing and there just don't seem to be enough hours in the days to cover both activities.  (Sewing of course leaves me with loads of fabric snippets!!).  However I do have a card made which I can take along to Pixie Snippets Playground for challenge # 324.  Apart from the base card everything else comes from my snippets boxes.  The base layer was a piece of brown card which I embossed with some text and the stitched frame was left over from another project.  The words were die cut from a scrap of gold pearl card and the flowers and tiny circles die cut from scraps of cream, gold and brown.  The smallest flowers were punched from really tiny scraps.

Do pop along to take a look at the lovely stamped card made by Di this time using some of her larger snippets of card and paper. 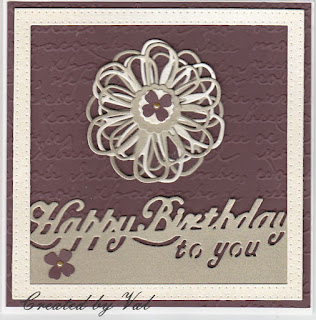