It occurred to me that the donkey stamps could well be used for a Valentine card but in the end I decided to make a fun Anniversary one instead. Started with the square lattice background which was die cut and backed with a piece of text paper, then the two hearts were cut with the white one being embossed and brushed lightly with some red ink.  Donkeys were stamped, coloured and fussy cut and finally the sentiment added.  Very low temperatures again today - brrr!! 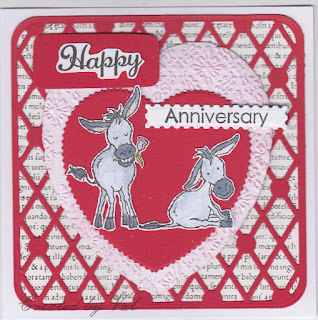 Stamps - Darling Donkeys set from ZStampin' Up
Sentiment - words from two separate freebie stamp sets
Text - from an old Papermania paper pad
Lattice die - Tonic die which I've had for some years
Hearts - Tonic dies, also been in my stash for years