I have cut down on the number of magazines I pick up although I have to admit I still get tempted if there is a good free gift which I think I will use on more than just one occasion.  This fairy set was one such set which included an embossing folder and a set of fairy stamps (14 stamps in all).  I had a piece of watercolour paper which had been coloured with Pixie Powders so I put part of it through the embossing folder before carefully inking the embossed area with a black marker.  The fairy and sentiment were stamped onto this in black and the edges sponged with matching ink.  A larger piece of the coloured card was used as a background, topped with a piece of purple card which had a corner die cut to show the colours through.  Three little gems and that's it.  The mica in the Pixie powders gives a lovely sheen which unfortunately doesn't show in the picture. 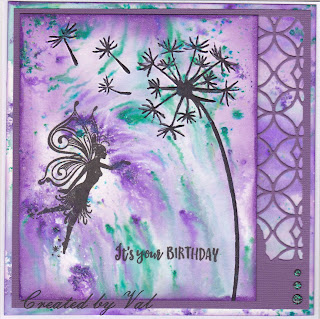