It would appear that most crafters are well into thinking about Christmas by now and last weekend I spotted my friend Jill of Jill's Quills at a local show demonstrating some of her quilling.  She had a series of clear plastic baubles containing a variety of snowflakes so of course I had to treat myself to some of the empty baubles so that I could have a go and this is one of the ones I've made.  As you can imagine these are not the easiest things to photograph and I just couldn't get it to hang facing the right direction for the camera.  I resorted to standing it on a small flower pot and even that isn't the best of photos because of the reflections but hopefully you can see the general idea.  I might carefully take it out of the bauble later to get a picture of the actual snowflake to see the detail so watch this space! 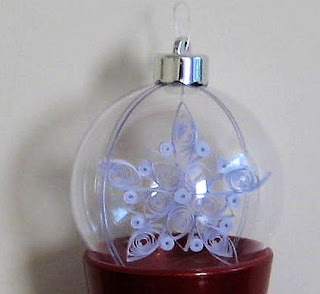 EDITED:  I decided against removing this snowflake from its bauble but I've made another one of a different design using silver paper this time.  It is now ready to be inserted into another bauble. 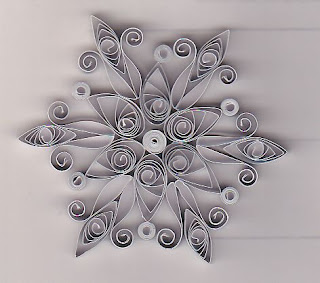