I must say I really didn't like the look of the challenge on Make My Monday this week where they are asking us to make something inspired by a literary classic by Jane Austen.  English literature was my absolute least favourite subject at school and although I read a great deal I must confess that  I'm never drawn to any of the 'classics'.  However, as I was working on a card this morning it occurred to me that maybe this 'sit up and beg' bicycle is maybe reminiscent of a gentler era with its slower pace of life so maybe it will fit in with the challenge.  If I have a better idea later in the week I may try again just as long as I don't have to actually read the book!!

Background paper is from Papermania capsule collection, a Couture Creations embossing folder has been used, the bicycle is a Memory Box die, mounted onto a Nestabilities label.  Sentiment produced on the computer and the bow was cut with a Die-namics die and embossed. 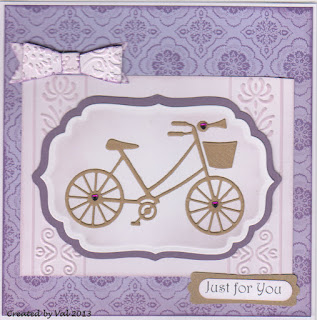