Free as a Bird

As I was trawling around a few blogs (as you do) I spotted a little row of birds on a branch which had been coloured as robins HERE so I decided to have a go.  I didn't have the colour of card which had been used originally but I tried mine using kraft card with Coloursoft pencils and my card layout is different but I think it has worked. Made a change from stamping  onto white and helped with the shading on the birds.. The image panel was backed with a circle which had been embossed with a 'falling snow' embossing folder and a piece of design paper was used also.  Sentiment stamped in red onto a scrap of white card with the ends punched. 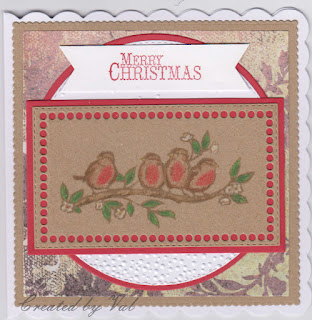