A Bird for the Playground

Time to visit the Playground again with a snippets card and as usual there is a super prize on offer and in fact this time around it looks as if there could be a double win.  I've used some large and small snippets for this card but apart from the card blank I've not cut into any new pieces.  The background is from a Prima pad which I've had quite a long time and I always save the left over pieces at the back so that I can use them for another project.  The bird was built up using some snippets of cream card using a bird die and a 3D embossing folder.  I started with the bird and wing shapes which I then embossed; the next move was to emboss some more pieces of cream card so that I could fussy cut (with scissors) the flourish areas to form the elaborate tail feathers.  Gold gilding wax was rubbed lightly over to bring out the detail before assembling the final bird and adding a gem for the eye.  I found some snippets of brown card from which I cut and embossed a border strip and also the sentiment.  Do take a look to see the clever card Di has made this time using a number stamp and some of own snippets - a great idea. 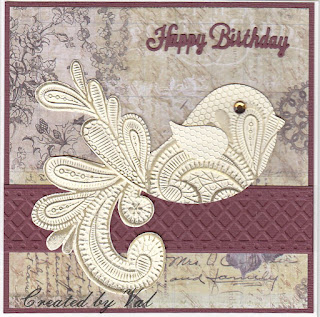